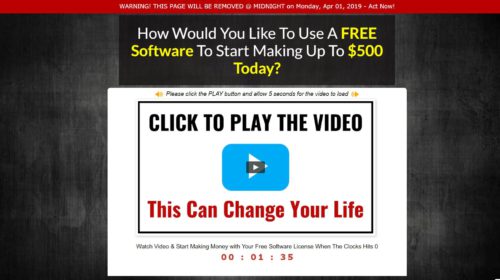 In this quick review of 7 Minutes Daily Profits I’ll be going over everything you need to know before pulling out your wallet.

I’ll be answering all of those questions and more within this review so be sure to stick around.

Is 7 Minutes Daily Profits Recommended? NO!

What Is 7 Minutes Daily Profits?

7 Minutes Daily Profits claims to be an incredible “free” software that has already help over 1,500 individuals earn $500+ everyday online.

Apparently it was created by a guy named “Vince Howard” and it’s your golden ticket to making tons of easy money online.

While I know that all sounds incredible, it also sounds a bit too good to be true doesn’t it?

That’s simply because it it.

What Is 7 Minutes Daily Profits Really?

In reality 7 Minutes Daily Profits is a get-rich-quick schemes that’s trying to get your money by promising you the world.

They try to lie, and mislead you into paying for something that isn’t what they claim it is.

I wouldn’t call it an outright scam for a few reasons that I’ll be going over shortly.

However it is definitely super shady, and it certainly won’t live up to the expectation that they create on the sales page.

This “system” is as great as they claim, however it’s not all bad. Let’s take a minute to go over some of the good and bad things about it.

Over the next several sections I’ll be going further into detail about all of the points I listed out above.

If you are considering purchasing this “system” there are a handful of things you need to know that are either misleading or lies.

First off, there is absolutely no way you will make $500 today with this system.

The second thing you need to understand is the idea that you only have to work 7 minutes to make money online is ridiculous.

While it is absolutely possible to make good money online, (I even make a living online) it takes plenty of time and effort.

There is not “magic software” that’s going to start making you money without you having to do anything.

If something like that really existed, everyone would be doing it.

You know the few people at the beginning who created video testimonials saying they’ve made a ton of money with this system?

Well as it turns out, they are actors.

The image below is a screenshot of a woman from the sales video claiming that the system worked for her.

While the image below is an advertisement from the same woman saying that she’ll make a spokesperson video for a fee.

Now if you were thinking about giving it a chance seeing as it’s a “free software” you might want to pay attention.

First off, even though they say it is free multiple times in the video, they still try to charge you 9 bucks.

If you’re thinking, “well what’s 9 bucks?” you’re really not going to like this next part.

After purchasing the “free software” for 9 bucks, you’ll be hit with a bunch of way more expensive offer.

They will claim that these products will help you make more money, even faster.

Or they might even go as far as saying that you need them to make money.

These up-sells will cost hundreds of dollars!

Like I said earlier, I don’t know if I would call this a complete scam, but I wouldn’t argue if you did.

While it attempts to lie and mislead you into paying for something that isn’t what they promise, you would still get some training.

Not to mention it’s sold through ClickBank, which means you can get you money back if you hate it.

With that being said, I still do not recommend that you spend your money on this system.

If you’re interested in making money online, and you’re willing to put in the time and effort to do it, I have a suggestion for you.

Since joining their program I’ve been able to make enough consistent money online that I quit my job.

Keep in mind that it is NOT some get-rich-quick scheme, it’s a training program and tools platform.

They give you everything you need to succeed, but you still have to put in the work.

Is 7 Minutes Daily Profits A Scam? What Do You Think? Let Me Know In The Comments below!