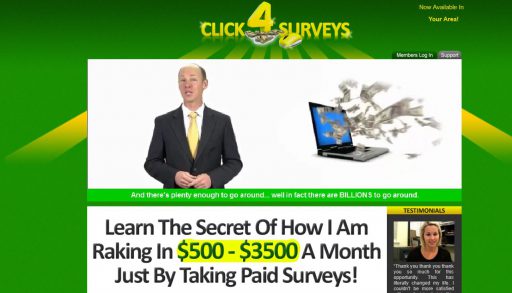 In this quick review of Click 4 Surveys I’ll be going over several reasons why you shouldn’t give them any money.

You aren’t going to make anywhere near as much as they claim!

Let’s jump in and go over why!

Click 4 Surveys is a website that claims to have a secret that will show you how to make $500 – $3,500 a month just from taking paid surveys.

On the website there are multiple testimonials claiming to be from people who have made thousands of dollars with these surveys.

I mean it sounds pretty incredible.

Being able to make $5 – $75 per survey, just for answering some simple questions.

The truth is that Click 4 Surveys is a scam website that is trying to take advantage of you and get your money.

They are trying to take advantage of people who are interested in making money online, but don’t know too much about taking surveys.

Most people know that you can make money online by taking surveys, but they don’t know how incredibly little you’ll get paid for it.

Most legitimate survey companies will pay you somewhere between $0.50 – $2.00 per survey, with the occasional one paying slightly more.

I personally don’t think taking surveys is worth it, you’ll be spending long hours answering questions just to make a few extra bucks a month.

If you’re really interested in making money online I always suggest checking out my top ranked program where you can learn about affiliate marketing.

It’s actually how I make my living online.

Daniel Cooper, the supposed creator of this Click 4 Surveys claims that you will be able to make around $50+ per survey.

Just think about it for a second, legitimate survey sites like Pinecone Research will pay you 50 cents to a couple bucks for taking a survey.

They pay so little because there are so many people out there willing to take surveys, that they don’t have to pay much.

Why would any survey company pay $50 per survey when there are people out there who would do it for $0.50?

Just check this out!

The guy in the video is a paid actor that I’ve seen time and time again on various different scams like Profit Genesis 2.0.

There is honestly so much more I could write about Click 4 Surveys, but I honestly don’t think I need to.

The truth is that any website that tells you that you can make more than a few bucks per survey is simply lying to you.

The most I’ve seen a survey go for is around $10, and they take an hour to two hours to complete, making it not worth it.

Avoid Click 4 Surveys, they will just take your money then redirect you to legitimate survey websites that will only pay you a few bucks at most.

If you’re interested in actually making money online, you should check out My Top Ranked Program!

They teach you how to make money by getting companies to pay you for recommending their products and services.

Is Click 4 Surveys A Scam? What Do You Think? Let Me Know In The Comments Below!