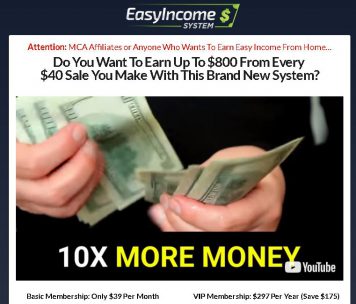 In this Easy Income System I’m going to go over what it is and give you some reasons why I personally don’t recommend it.

CLICK HERE TO READ ABOUT MY TOP LEGIT PROGRAM!

What Is Easy Income System About?

Well if you watch through their sales video you should at least have some type of idea what it is.

You’ll also be using similar tactics and videos to get others to sign up for Motor Club of America as well.

Also, Motor Club of America is not the same as the popular National Motor Club Of America.

They did that to seem more legit.

I always like to list out the good and bad things about a program to help you decide whether to get it.

Now let’s take some time to jump into each of the points that I listed above!

It’s Not As Easy As They Claim

I mentioned the fact that you can make money with this system as a pro, because you can.

However it is not going to be nearly as easy as they make it seem.

They make it seem like you just pay the money, and they practically give you stuff that will automatically make you money.

They claim that you just have to follow some simple steps in their training and the money will start rolling in.

The truth is that there is a lot more to it than that, and I’m going to go over why.

Personally I am not a fan of MLM programs, however I know there are a lot of people out there who are.

Just be aware that this section is influenced by my opinion of MLMs.

As I mentioned in the beginning, you are going to be making money for getting people to sign up for the same thing you’ll be signing up for.

You’ll get a website and sales video that’s just like the one that you are thinking about signing up with.

My main problem with the system is that the money that you will make will strongly depend on what the people under you do.

The fact of the matter is that only the people at the top of the MLM pyramid actually succeed.

You’ll understand a little more after reading this next part.

The Price And Upgrade

As you probably know, it is $39 per month to join the system, however you’ll want to sign up for the $297 Yearly membership if you want to make real money.

If you just stick with the $39/month plan you’ll be paying more for the opportunity to make less money.

The reason they do this is because they know most people will fail in the first few months, so they give you incentive to pay the whole year up front. 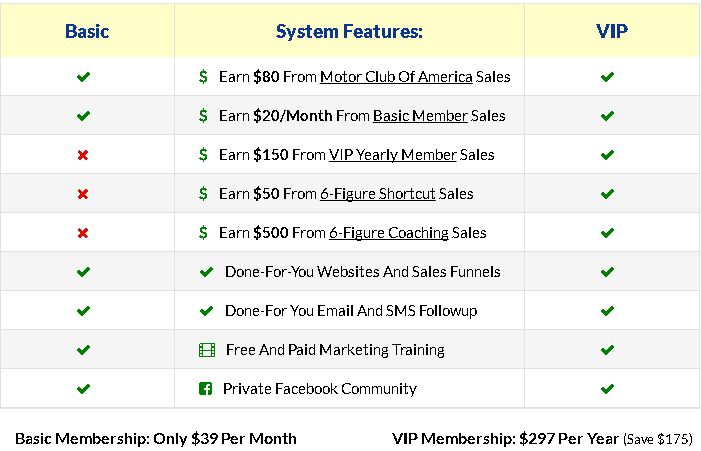 They even point out in the video that you will make 10x more money if you just go yearly.

The main difference between a Pyramid Scheme and an MLM is the fact that an MLM has a product.

Well the shady part about MCA is the is that most of it’s members are just people trying to get others to sign up.

They aren’t actually utilizing the product that MCA offers and I’ve also seen many complaints online about their terrible service.

I’m not going to go too much further in depth here about it, but I suggest you research the Motor Club of America Scam.

Is Easy Income System A Scam?

Personally I consider the Easy Income System a

because it’s not a real thing.

They just use the “Easy Income System” name to try to get you to sign up for their real system MCA.

As for MCA, I’m not going to flat out call it a scam, but there are many past members who do.

If you sign up you will be using shady tactics to get other people to sign up to.

The idea behind Easy Income System is based in truth. There are programs out there that will pay you to get people to buy there products.

The difference is the fact that the other affiliate programs actually have great products that buyers will love and use.

Did you know that websites like Amazon, Walmart, and various other large retailers will pay you to get people to buy from their websites.

That’s exactly how I make money online, and I started making enough to quit my job and work from home.

If you want to learn about the program that gave me all of the training, tools and support I needed to succeed; you can click here to read more!