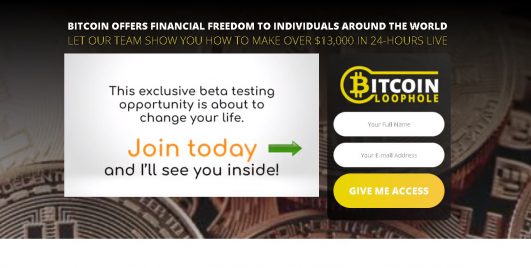 Is Bitcoin Loophole A Scam? YES

What Is Bitcoin Loophole?

With the incredible rise of Bitcoin recently, a ton of scams have popped to catch people who are trying to take advantage of it.

Bitcoin Loophole in nothing but a fake binary options trading software disguised as a Bitcoin opportunity.

When in reality you need to avoid Bitcoin Loophole at all costs and I’m about to give you several reasons why!

I always try to list out the good and bad things about a program, but Bitcoin Loophole has none.

Now I’m going to take some time to go over each of these individuals points in as much detail as I can.

If you’ve looked up reviews about Bitcoin Loophole, you’ve probably already seen quite a few calling it a scam.

Then after you read about it being a scam, they point you in the direction of a legit trading robot.

Well here’s something that none of those other websites will tell you.

They all make it seem so easy. Like you just deposit some money, click a few buttons and start making bank.

Well I tried it for quite some time in the past, and it absolutely wasn’t that easy.

I followed their instructions, signed up for their recommended robots, deposited my cash, and lost it all in about a day.

And that wasn’t the only time.

Don’t get me wrong, you can make money with binary options trading, but it’s no where near as easy as everyone makes it sound.

I prefer to use a way less risky method!

If you haven’t looked to deep into what Bitcoin Loophole is yet, you might be wondering how you could lose money with a free system.

Well technically it is free to use the Bitcoin Loophole “software”, but you’ll have to deposit a minimum $250 before you can use it.

In order to trade binary options you’ll have to sign up for a shady broker, and make your deposit first.

Then once you run the “software” it will continue to trade away all of your money.

This is how scams like this one make money. They get a percentage of the money that you deposit.

There are even many scam brokers out there that won’t give back your money even if you don’t trade it away.

Now let’s get back to Bitcoin Loophole being a huge scam!

One of the biggest red flags out there is when a scam claims that you can make an insane amount of money in no time at all.

The only way you ever stand to make that much money that fast is if you invest an even larger amount to begin with.

Other than that this claims is complete and total Bull crap!

I know that it can be pretty reassuring when you see someone else claiming that this system made them rich.

Well the problem comes with the fact that all of those testimonials at the bottom are fake.

They just used stock photos of random people, and made up crazy claims to get you excited to give them money.

If you think it’s crazy that the testimonials are fake, wait until you read this next part.

The Creator Is Even Fake

I know Steve McKay sounds like an incredible person who has made himself and others rich.

But the fact is that he simple doesn’t exist.

The truth in that Steve McKay is a fake name that has been used in several bitcoin trading scams like this one.

I just wrote a review yesterday about The Bitcoin Code, which is another one of his scams.

Is Bitcoin Loophole A Scam?

I want to be completely honest and tell you that I didn’t use Bitcoin Loophole, but that’s only because I’m certain I would be throwing away money.

I was honestly in the exact same position as you are right now about a year and a half ago.

I was learning as much as I could about investing in binary options, or other things in order to make money online.

Well I lost a ton of money doing that before I found a way to make money online without investing.

You can make money by getting other people to go to websites like Amazon, and buy stuff.

It’s actually pretty simple to do, and I’ve been able to quit my job and work completely from home since I started.

If you are interested in getting started for free, you can click here to learn where to get started!

2 thoughts on “Is Bitcoin Loophole A Scam? 5 Reasons To Avoid! [Review]”