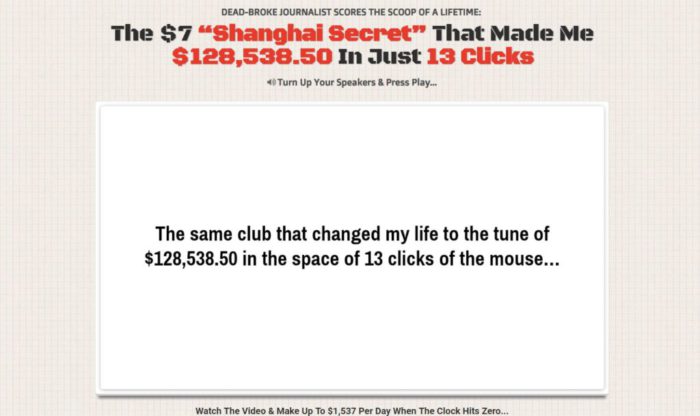 In this quick review of Club Shanghai, I’ll be going over everything you need to know about it.

Get the answers to those question and so many more within this review!

Is Club Shanghai A Scam?: Debatable

Is Club Shanghai Recommended?: No!

What Is Club Shanghai?

Club Shanghai claims to be an incredible new system that can apparently help you make thousands of dollars online.

The sales page located at clubshanghai.co consists of a video narrated by the supposed creator of the system “Jermaine”

Apparently Jermaine joined a club that completely changed his life and earned him $128,538.50 by only making 13 clicks.

Now he’s going to give you keys to the exact same club!

What Is Club Shanghai Really?

In reality Club Shanghai is an incredibly over-hyped system for making money through a messaging app called WeChat.

WeChat is a messaging app created in China that is similar to other apps like Facebook messenger and Whatsapp.

It’s incredibly popular in China and hosts around a billion users.

The most important thing that you need to understand is that even though they might teach a method that could make you money, it’s not going to be like they claim.

Is It As Great As They Claim?

Like I said above, you need to understand that Club Shanghai is not going to be as incredible as they claim it is.

I’ve been a full time online marketer for years now, and one thing I can tell you is that it’s not as quick and easy as everyone makes it sound.

There is absolutely no way that any method out there will be able to make you hundreds of thousands, thousands, or even hundreds of dollars in just 13 clicks.

Don’t get me wrong, it’s absolutely possible for anyone to make money online, it just takes time and consistent work.

While there might be the potential to make money with this system, it’s not going to be anywhere near as simple as he claim.

Ironically it won’t be anywhere near as cheap as he claims either.

Even though the $7 price tag is plastered all over the sales page, video and popups, it’s not the full price.

The $7 will only get your foot in the door.

These will include extra training, tools, and other things that are required for you to even have a chance at making money.

You’ll also have to invest a lot of time and money in things such as advertising and driving traffic.

Let’s take a minute to list out the good and bad things that I could come up with about Club Shanghai.

I already covered some of the things listed above, however I’ll be covering the ones I haven’t talked about in the next few sections.

In the past I’ve seen and reviewed other “systems” that were practically the exact same as this one.

“The China Secret” and “Club 365” have incredibly similar promotions. It wouldn’t even surprise me if they were the same product.

My guess would be that they have simply changed the name due to the fact that they other received a bad reputation and reviews.

Just in general Club Shanghai has a very shady feel about it that makes me not want to trust it.

For example, they claim that there are only a small number of people that are being excepted, when they will most certainly take anyone’s money who will give it.

Another shady thing is the fact that there is almost no information about the so called creator Jermaine.

ClickBank products like this one are normally created by anonymous people because they are low quality.

That way they can’t be held responsible when people ultimately call them out for all of the lies and deceptive tactics.

Is Club Shanghai A Scam? – Conclusion

At the end of the day it’s up to you to decide whether or not you want to consider it a scam.

As for me, I don’t consider it a scam mainly because it’s possible to get a refund, and a potential to make money.

With that being said, there is still absolutely no way that I’m going to be recommending this to any of my readers.

They use incredibly deceptive sales tactics in an attempt to get people to pay for something that’s not like what is promised.

If you’re interested in making money online, and you’re willing to put in the time and effort that’s required, then I have a suggestion for you!

My Top Ranked Program gives you access to all of the training, tools, and support you need to make money online.

There are no shady sales tactics, lies, or unrealistic claims.

Since joining their system I’ve been able to make enough money online to quit my job, and work completely from home!

Is Club Shanghai A Scam? What Do You Think? Let Me Know In The Comments Below!