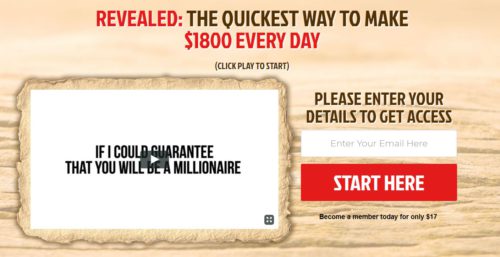 In this quick review of Silk Road Effect I’ll be going over everything you need to know before signing up.

Will you be able to make anywhere near $1,800 per day, or are they just claiming you will to get your money.

Is Silk Road Effect Recommended? NO!

What Is Silk Road Effect?

It was recently released on ClickBank, and it claims to have a secret that can make you thousands of dollars online.

Apparently Steven is an internet millionaire who has decided to show you his method of making money.

While all of this sounds incredible, it’s most-likely not all true, and I’ll be going over why not shortly.

What Is Silk Road Effect Really?

In reality Silk Road Effect is an over-hyped training program that might help you make some money online.

It’s a borderline get-rich-quick-scheme that was really only made to make the creators richer.

While they might give you some helpful information that could lead to you making some money; it’s not going to be anything like they claim.

I’ll be going further into detail about this soon.

Before I go off listing all of the bad things about this “system”, I want to try and be as fair as possible.

Throughout the rest of this review I’ll be going further in detail about the information I listed above.

As soon as I arrived on the sales page I knew that I was going to have to list this as a con and write this section.

They try to make it seem like shortly after purchasing their system, you’ll start making $1,800 per day.

That’s the reason why I want to call this “system” a get-rich-quick-scheme.

They want to you believe that you’ll start bringing in thousands of dollars incredibly quickly.

Don’t get me wrong, you can make good money online, however it takes plenty of time, and consistent effort.

One of the first things that immediately made me skeptical of this “system” is the fact that it looked so similar to other schemes.

If you look at the top of the sales page you’ll see a logo for an online digital product marketplace called ClickBank.

Lately there have been a ton of “get-rich-quick schemes” launched by users within websites.

Schemes like Bulletproof profits, The Ecom Freedom Blueprint, and many others have been launched from there.

Another thing you need to be aware of is the fact that the $17 that you pay for it is just the beginning.

After purchasing it you’ll be hit with a bunch of up-sells or add on items that they will either claim you need, or will help make it easier.

That’s not all though.

There are other expenses that you’ll have to be ready to pay for such as domain names, web-hosting, and sending traffic to your website.

The last of which can become very, very expensive.

It’s honestly up for debate as to whether you can call Silk Road Effect a scam.

On one hand, they lie and try to mislead you into purchasing a product that won’t live up to your expectations.

While on the other hand you might get some helpful information about making money online, and you can get a refund if you hate it.

With that being said, there is still absolutely no way that I will ever recommend this product to my readers.

There are simply too much hype, other shady things about this system for me to recommend it.

There are simply other programs out there that aren’t shady, have way better training, and tools.

If you’re interested in learning how to make money online, and you’re willing to put in the time and effort it takes, I have a suggestion for you.

Since joining them, I’ve been able to make enough money online to quit my job and work completely from home.

It’s not another “get-rich-quick scheme”, it’s a training program and tools platform.

It’s up to you to follow the training, and put in the work.

With that being said, If you’re interested in learning more about them, you can…

Is Silk Road Effect A Scam? What Do You Think? Let Me Know In The Comments Below!