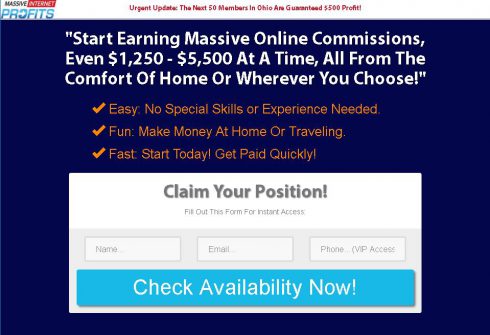 Is Massive Internet Profits Recommended? NO!

What Is Massive Internet Profits?

This claim is actually true, however the sales page is full of misleading information and lies that you need to know about.

Massive Internet Profits is not what it appears to be, and throughout this review I’ll be going over exactly what it is.

What Is Massive Internet Profits Really?

As it turns out, Massive Internet Profits doesn’t even really exist. It’s just a website that is trying to funnel you into a completely different program.

The program that they are trying to get you to sign up and pay for is called MOBE.

Later in the review I’ll be going over what MOBE is and telling you why you should avoid it, but for not I want to go over the misleading information and lies that MIP tells you.

Let’s go over some of the good and bad things about this system.

Over the next several sections I’ll be taking the time to go over what exactly I mean with those points.

This is something that a lot of scams will tell you in their sales video to keep you watching.

They claim that if you watch the entire video you’ll get 500 bucks.

However I have never found a single one that have actually paid anybody the $500.

If you decide to watch through the entire video, and even purchase the product, you’ll never hear anything else about the $500 they promise you.

After you move on to the second sales page with the video, there are some testimonials that you’ll see at the bottom.

However these are not legitimate testimonials, they are just stock photos with lies next to them.

I mean just take a look at this testimonial.

The image looks like a stock photo, but that’s not the thing that stands out to me.

The man in the image is obviously younger than the 78 year age that he claims to be.

I personally think this was done by someone who simply wasn’t paying attention.

One thing that I can assure you is that you don’t have to rush back and try to sign up.

No matter how long you take, they will always be willing to take your money and allow you to join.

This is just a lie told by scams in an attempt to get you to sign up without thinking about it.

Programs like this know that you’ll be skeptical of joining a program with not credibility.

That’s why that try to make it seem like they’ve been featured on various news outlets.

I keep up on money making opportunities for a living, and I promise you that this one hasn’t been featured on any of those news places.

If they were, you would be able to do a simple Google search and find it right away.

One thing that is important for you to know is that Massive Internet Profits doesn’t actually exist.

It is simply a sales page designed to funnel you into another program by misleading you, plenty of other website do this like Limitless Commissions, My Online ATM, and Borderless Income System.

The real program that you’ll be signing up for is called My Online Business Education aka MOBE.

MOBE is actually a good online marketing training program that you can follow to make money online.

However I do not recommend it to most people because of one big problem with it.

Requires A Lot Of Money

Even though it is possible to make money with MOBE, it will cost you a lot of money to do it.

MOBE’s training revolves around you getting others to sign up and pay for their various training products, and you’ll earn commissions when you do.

However you have to first purchase their products before you can make a commission from them.

Like I said, it’s possible to make money with their system, however it’s risky and requires you to pay thousands of dollars.

Is Massive Internet Profits A Scam?

The main reason why I can’t completely call this a scam is because you can actually make money with it.

However Massive Internet Profits doesn’t even exist, and misleads about the system you’ll actually be paying for.

With that being said, due to the misleading information, lies, and cost of the program I recommend that you

However now that you know the expenses and the fact that it will take a lot of work, you can decide for yourself whether you think it is worth it or not.

The main reason why I don’t recommend MOBE to my reader is because I know that you don’t have to spend thousands of dollars to make good money online.

I know that because I make my living online, and have spent no where near the amount that you have to spend to succeed with them.

If you get access to the proper training, tools and support, you can make money the exact same way I do.

You can get started with all three of those things for free with my top ranked program.

Is Massive Internet Profits A Scam? What Do You Think? Let Me Know In The Comments Below!