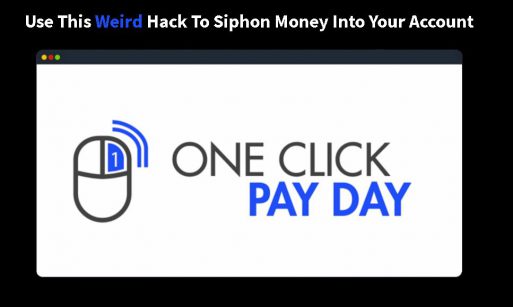 In this scam review of One Click Pay Day I will be going over the system and telling you why I think it’s a scam!

One Click Pay Day claims to be a system created by a woman named Kathy Evans.

It claims to be an incredibly easy way for any one to make thousands of dollars online with just one click.

I just want to tell you right up front that this is a crap system that will not make you any money.

It is absolutely possible to make money online and I know that because that’s how I make my living.

I work from home, and I can tell you one thing for certain.

You cannot make money online without putting in time, effort, and at least a bit of money.

I want you to be aware that any system that claims to be a “one click” or “push button” method is just a lie.

If you want to learn about I real program that helped my make my living online, you can click here to read more!

Even for scams I always try to find at least one good thing to say about it, but I just can’t with this one!

From beginning to end this sales video is filled with lies in attempts to get you to give them your money.

The video starts out with multiple people claiming that they made thousands of dollars in their first week or so.

I honestly hate to be the one to break it to you, but they are all complete lies.

For a living, I keep up to date with ways to make more money online. If there was a way to make that much money by just clicking, I would know about it!

When I first saw a sales video that actually had clips of people claiming they made that much money, I thought it had to be real.

I never thought that a scam would pay a ton of money to actors to say those types of lies.

Well as it turns out, now a days you can simply pay $5 to someone to have them say exactly what you want.

The website Fiverr allows you to pay 5 bucks to people to have them do various tasks.

Scammers have taken advantage of that to get cheap, slightly convincing, fake testimonials.

As someone who seeks out and reviews online money making programs, I see this all the time.

Programs and scams consistently claim that you can make an insane amount of money online with no work at all.

As I mentioned before, that’s simply just not true. If it was, everyone would be making money online.

There are so many lies in this sales video that it’s not even funny.

I mean they tell you that you are making money as you watch the video.

They claim that they have created you an account that’s bringing in money and getting thousands of likes on Facebook.

Another thing that doesn’t make sense is the fact that she claims that she started this system 5 years ago.

However they also claim that it’s a new system that you can take advantage of now.

There are so many things that are just complete lies.

If I haven’t then just look at this disclaimer that they have under the video!

It says that most people don’t make any money with this system. They put that there because they legally have to!