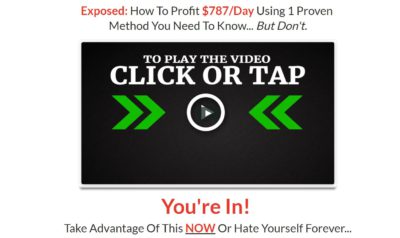 In this quick review of Secret Online Goldmine I’ll be going over everything you need to know about it before purchasing.

Will you actually be able to make anywhere near $787 per day, or are they just lying in order to get your money?

I’ll be answering all of those questions and more within this review, so you’ll want to stick around.

One thing I want to point out is that they do not have a limited number of positions available, so don’t rush into buying it.

Take the time to read reviews because that will help you avoid scams, and even learn ways to actually make money online.

Is Secret Online Goldmine Recommended? NO!

What Is Secret Online Goldmine?

Secret Online Goldmine claims to be a system that takes advantage of a hidden online Goldmine that only a handful of people have used to make a ton of money.

Apparently all you have to do is activate your Goldmine, and you’ll automatically start bringing in tons of money.

Money that can add up to $787 per day, each and every single day.

At least that’s what they claim in the sales video.

What Is Secret Online Goldmine Really?

What Secret Online Goldmine claims to be and what it actually is are two completely different things.

“April” tries to make it seem like all you have to do is spend 15 minutes setting up a system, then you’ll start raking in tons of cash.

However that’s simply not How Making Money Online Actually Works.

While it is possible to make money online through the use of email marketing, like she claims, it’s not the way they make it seem.

I’ll be getting more into the problems here shortly.

Believe it or not there are actually both good and bad things about this system, and I want to be as fair as possible.

Over the next several sections I’ll be taking the time to go further in depth about all of the points I listed out above.

There are honestly so many unrealistic claims and just complete nonsense on the sales page.

The unrealistic thing they do is try to make it seem like you’ll start bringing in $20k per money almost immediately.

It is possible to make that kind of money online, I know a few people who do, however it certainly doesn’t happen overnight.

It takes a lot of consistent work in order to build an online income like that.

There are a bunch of other claims like only 500 people or something know about email marketing, which are a complete lie.

One thing I always do when reviewing a new product is look a bit into the background of the person who created it.

In this case, I literally couldn’t find a single thing able “April Collins”, so I decided to run her picture through a reverse image search.

And guess what happened.

It turns out that the image used for Aprils picture in the sales video is just a stock photo.

My guess would be that April isn’t the real creator of this system and the real one wanted remain anonymous.

Most-likely because they know that a lot of people are not going to like what they get for the money.

Reading or watching video testimonials from people who claim to have had success from a system can always be reassuring.

That’s why creators of systems like this go out of their way to pay people to make them.

That’s right, all of the video testimonials in the sales video are just hired actors.

The image above is a screenshot of a testimonial from the Secret Online Goldmine video, while the image below is of the same guy advertising as a spokesperson.

#4: Similar To Other Scams

I’ve reviewed hundreds of online money making systems, and a majority of them are get-rich-quick schemes.

And one thing that I noticed is that a whole lot of them look incredibly similar, and Secret Online Goldmine isn’t any different.

Systems like Explode My Payday, and Your Freedom Mentor are very similar.

Not to mention the fact that Bulletproof profits even mentions something about being a “Secret Online Goldmine” as well.

#5: More Expensive Than It Claims

Well the starting price is actually $47, however if you keep clicking off it will drop down to $17.

There are several reasons they can afford to drop the price down so much, the first of which is the fact that it isn’t worth $47.

But the main reason is because they are planning on making most of their money with the up-sells.

After purchasing it you’ll be hit with a bunch of add-on products that will mos-likely range in the hundreds of dollars.

Their plan is the get you in the door with a relatively low price, and then sell you more products.

At the end of the day, it’s honestly debatable as to whether or not you can actually call it a scam.

They try to completely lie and mislead unsuspecting people into buying something that isn’t what it claims to be.

However on the other hand, you will actually get something for your money, and it’s possible to get a refund through ClickBetter.

With all of that being said, Secret Online Goldmine simply has way too many red flags for me to recommend it.

In fact, I strongly recommend that you avoid it!

If you’re interested in making money online, and you’re willing to put in the time and effort it takes to succeed, then I have a suggestion for you.

If you’re interested in learning how to get started for free, you can…

Is Secret Online Goldmine A Scam? What Do You Think? Let Me Know In The Comments Below!