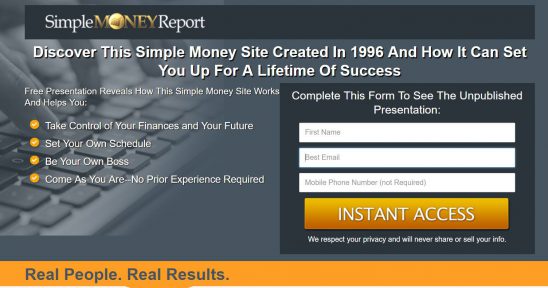 This is just going to be a quick review that will briefly go over why I think you should avoid Simple Money Report.

I came across it while researching another scam that is almost exactly like this one.

Is Simple Money Report Recommended? NO!

What Is Simple Money Report?

Simple Money Report claims to teach you an incredibly simple way to become a millionaire online.

They claim that you’ll be creating simple money sites that will make you a ton of money in a very small amount of time.

However in reality, they are just telling you whatever you want to hear in an attempt to get your money.

In this review I’ll be giving you several reasons why you should avoid it!

Throughout the rest of the review I’ll be going over what exactly I mean with the points listed above.

One thing that I noticed right off the bat with this program is that they make a whole bunch of crazy unrealistic claims.

They make it seem like you’re guaranteed to become a millionaire without having to do much work, or put in a much time.

When in reality, if you want the chance to make any money at all, you’re going to have to put in a whole lot of time and energy.

And even then there is no guarantee you’ll make anywhere near the amounts of money they claim you can.

Another thing I want to point out is the fact that the testimonials under the video are completely made up.

They just use random stock photos, and write random quotes next to them in an attempt to convince you that other have succeeded.

However it is actually just an actor they found online, and paid to say whatever they wanted him to. 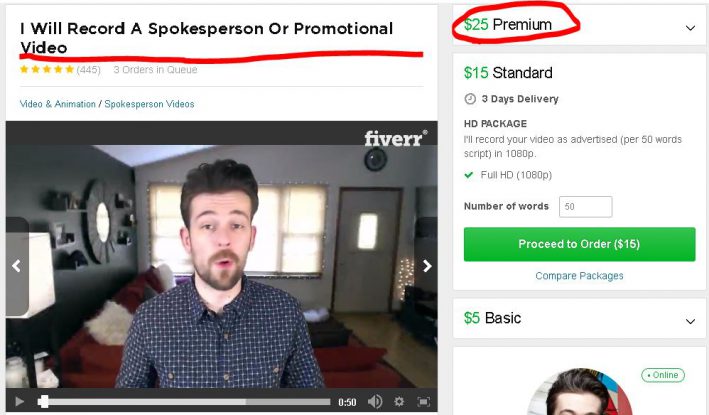 He has been featured in other scams like 30 Minute Money Methods, and Free Ad Cash System!

The next thing you need to know is that Simple Money Report isn’t actually the name of the program you’ll be paying for.

Simple Money Report is just a fake, catchy name that they come up with to make it seem like a different product when in fact it’s another program called MOBE.

The creator of SMR is most-likely a member of MOBE who will make money by getting you to join.

There is nothing wrong with making money by promoting products that you believe in. The problem comes in when they actively mislead you and lie about what you’re signing up for.

I can’t go over everything about MOBE here, but I want to hit a few main points that you need to know before joining.

Firstly, they have some decent training, and teach you a method that can actually make you money.

With that being said, the training is centralized around getting other people to join and pay for MOBE products and memberships.

There are a few problems with this; the main one being the fact that their membership is incredibly expensive, and you have to pay for it before you can earn money by getting other to join.

Here are some of their prices:

Those are the price that you’ll be paying, and the prices that the people you get to sign up will be paying.

Like I briefly mentioned earlier, I came across Simple Money Report while I was doing research for a “different” program called Simple Money Sites.

The reason I put “different” in quotes is because these two “programs” are exactly the same just with different names, and domains.

Those are the only two I came across, however I would not be surprised if there were several other websites that are exactly the same, just with different names.

Is Simple Money Report A Scam?

Even though the program you’ll actually be signing up for isn’t a scam, I consider Simple Money Report to be a scam because all of the lies, and misleading information.

I want to be clear, even though MOBE isn’t a scam I still do not recommend you join them. Unless of course you’re someone who is comfortable risking thousands and thousands of dollars.

If you are still interested in making money online, and you don’t want to risk thousands of dollars to do it, I have a suggestion for you.

My Top Ranked Program has helped me make enough money online to quit my job and work completely from home!

You have to be willing to put in plenty of time and effort, but if you’re willing to work, it’s completely free to get started.

Is Simple Money Report A Scam? What Do You Think? Let Me Know In The Comments Below!