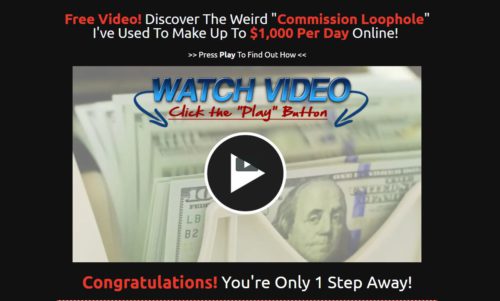 In this review of Super Affiliate Secrets X I’ll be going over everything you need to know about it before buying it.

Or should you even buy it at all?

I’ll be going into details that will make you realize that it’s not actually what you think it is!

What Is Super Affiliate Secrets X?

Super Affiliate Secrets X claims to be an online money making system that uses a “Weird Commission Loophole” to earn people up to $1,000 per day.

If you’re wondering what Super Affiliate Secrets X is, it’s probably because you watched the first several minutes of the video, and they never told you.

For the most part the sales video runs around in circles making promises, and boasting about how great the system is.

Without actually telling you what you’ll be doing.

The truth about Super Affiliate Secrets X is that it’s not even a real program at all.

Super Affiliate Secrets X is simply a sales funnel that was created in order to get you to sign up for a different program called Super Affiliate Network.

Some good news is that Super Affiliate Network is a legitimate program that can actually help you make money.

However it’s important that I point out right now that I do not recommend it for several reasons that I’ll get into later.

The main one you need to know right now is the fact that it’s prices ranges up into the 10’s of thousands of dollars.

There are some good things about this system, and plenty of bad things that we can go over here.

In the sales video they try to make it seem like you stumbled upon an amazing opportunity that you’ll never get again.

When in reality there are a ton of other websites out there that are just like this one.

Not to mention they all send you to the same program Super Affiliate Network.

All of these websites are created in order to mislead and lure you into signing up for SAN so the creator of the website can earn a commission.

There’s nothing wrong with earn commissions for recommended products, but trying to lie and mislead people into buying them is wrong.

One of the main reasons why I don’t recommend signing up for this system is it’s low success rate.

If you click on the “income disclosure” link at the bottom of the sales page, you’ll be taken to a page with the following chart.

As you can see, majority of their members make a very very small amount of money.

According to this chart, out of their 40,000+ active members, on average only a handful or so of them make what can be a full-time living.

And that’s not even getting into how much money they’ve spent to get there.

I know that you might be looking at the $47 price tag and thinking that it’s worth the risk.

The system works a “pay-to-play” system.

You have to pay thousands of dollars for training, that will teach you how to get other people to sign up.

Did I mention that you can’t get paid for getting other to sign up, unless you purchase that particular membership first?

I really don’t like calling systems a scam, but seeing as Super Affiliate Secret X doesn’t even really exist, I’ll call it one.

It was created for the simple intent of misleading you into signing up and paying for a completely different program.

The real program is Super Affiliate Network, which technically can be considered legit, but it’s certainly not recommended.

It has a poor business model that leads to the people at the top making a ton of money, and the beginners losing it.

I strongly recommend that you avoid Super Affiliate Secrets X.

However if you decide to sign up for it, let me know how it went in the comments below!

Believe or not it is actually possible for everyday people to make money online.

I worked a full-time job in retail when I found This Program Here, and built an online business that now earns me a full-time income.

My Top Ranked Program gives you all of the training, tools, and support you need in order to make money online.

Is Super Affiliate Secrets X A Scam? What Do You Think? Let Me Know In The Comments Below!