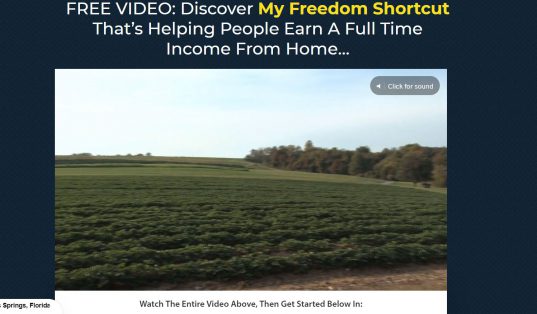 In this quick review of The Freedom Shortcut I’ll be going over everything you need to know about it before joining.

Is The Freedom Shortcut A Scam? Debatable

Is The Freedom Shortcut Recommended? NO!

What Is The Freedom Shortcut?

The Freedom Shortcut claims to be a program that contains an incredible shortcut that will help you make thousands of dollar online.

Apparently this Jordan guy was a struggling ShamWow salesman who finally found out how to make money online from another guy named Jeff.

This guys name is Jeff Lerner, and he has a series of online money making products that promise to teach you how to make good money online.

Well I’ve come across several websites like this one promoting Jeff’s products, so I know a thing or two about them.

The main thing you need to know right off the bat is that I don’t recommend that you sign up for them.

Let’s go over why!

Let’s go over some of the good and bad things that I could come up with about this system.

Over the next several sections I’ll be going further into detail about what exactly I mean with all of the points listed above.

It’s A Funnel Into A Different Program 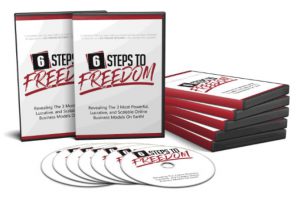 As I’m sure you might’ve realized by now, The Freedom Shortcut isn’t actually a program in and of itself.

It is actually just a sales funnel that is meant to get you to sign up for a different program called 6 Steps To Freedom.

It is a product created by Jeff Lerner who also created programs like Jeff’s 6 Figure Business System and Ultimate Laptop Lifestyle.

All of his products seem to have one thing in common, they have some decent information, but they only get your foot in the door.

While the product you are purchasing might have some decent training, it won’t be enough to make you the money that they promise.

The reason for that is the fact that this is part of what’s known online as a High-Ticket-Program.

Basically, you will begin to learn how to get people to purchase Jeff’s other expensive products, however you’ll have to purchase them first.

When you sell one of his products you’ll earn a commission for it, but only if you’ve already purchased it.

And the products can cost anywhere from $1,000 to tens of thousands of dollars.

That’s how the people in the video were able to make thousands of dollars in their first week.

They spent thousands of dollars first, and got lucky and were able to get some of their money back by selling it to someone else.

It’s Harder Than They Claim

They make it seem like you’ll barely have to put in any time or money into this in order to make money, and that’s couldn’t be further from the truth.

If you expect to make anywhere near the amount of money that they brag about, you’re going to have to potentially shell out thousands, and put in hundreds of hours.

Just think about it.

Do you honestly think it’s going to be easy to convince someone to spend thousands of dollars for this “business opportunity?”

If you end up deciding to purchase this, you need to be prepared to spend a lot of money, and work your butt off.

Personally I don’t recommend it because there are far better and cheaper ways to make money online.

High-Ticket-Programs like this one always have incredible low success rates, with only a small percentage of people actually making money.

Could Be Considered A Scam

I have The Freedom Shortcut listed as a “debatable” scam because you can argue that it’s not a scam.

However at the end of the day, the only thing that matters is whether or not the FTC considers it to be one.

And there is a good chance that they just might.

Similar High-Ticket-Programs have been shutdown by the FTC in the past few months.

This include both MOBE and Digital Altitude.

The FTC saw them a illegal pyramid schemes because the entire business centered around getting other people to join.

Personally I wouldn’t want to spend a ton of money and time on something that could be shutdown in the near or even distant future.

Is The Freedom Shortcut A Scam? – Conclusion

It’s honestly up to you to take the information I’ve given you and decide whether or not you think it’s a scam.

We could sit here all day and debate about whether it’s a scam or not, so I’m just going to say that I think you should avoid it.

I don’t think it’s a good idea to spend a ton of money on a “done-for-you” system that could disappear any day.

Why not take the time to learn how to start your very own independent that doesn’t rely on any one company to make money.

If you’re interested in making money online without shelling out thousands, I have a suggestion for you.

Is The Freedom Shortcut A Scam? What Do You Think? Let Me Know In The Comments Below!