If you’re trying to answer the question “What Is Trunited?” and are worried that it’s a scam, then you’re in the right place.

In this review I’ll be going over everything you need to know about Trunited before giving it a try!

Is Trunited A Scam? NO!

Trunited claims to be a platform for Socialized Commerce that will pay you money to do your shopping.

Basically it is a “cash back” system that will give you back a portion of the money that you spend at their recommended retailers.

Another way you can make money through them is by simply referring others to sign up and make purchases through the site.

I’ll be going into much more detail about everything you’ll be doing and what they offer, so stick around.

Whenever I write a review for an online money making program I try to list out both the good and bad things about it.

Now I’m going to take some time to go into detail about exactly what I mean with each of these points.

Trunited gets paid commissions when they get their members to purchase items through certain companies.

They then turn around and give a portion of the money that they make back to the members.

It’s basically like an “everybody wins” situation. The companies get sales, Trunited gets paid, and the customers get some money back.

You can watch their informational video here if you’re still a little confused. 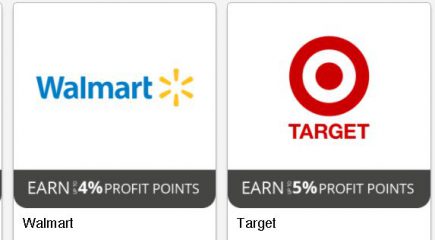 The purchasing system is actually pretty simple, you purchase items from the website in two different ways.

If you decide you shop Global Brands you can choose from retailers like Walmart, Best Buy Target and many more.

On the Trunited website you simply find the store you want to buy from and click on the Shop Now button.

You’ll earn different a different percentage of “Profit Points” depending on which store you choose to shop from.

I’ll go over what exactly a Profit Point is later, because it can be a bit confusing.

You can also shop Direct To Consumer which will basically just let you buy things straight from the Trunited website!

If you are someone who is trying to make any type of noticeable money from Trunited, this will be how.

If you refer people to Trunited, you can earn money from the money that they spend there.

You have to have at least refer one person who makes at least one purchase each month.

And you also have to build up at least $90 into your account from referral before you qualify for their affiliate program!

The goal is to become a “PaceSetter” which would mean that your referrals have also referred enough people to have 15 people under you.

For example, you refer 3 people, and each of them refer 2 people who have referred 1 person.

That makes 15 people, which means you can then start earning from your referral’s referrals and not just your own.

This is where I find the biggest problem with Trunited. I don’t really see much earning potential here.

You can earn a bit of money back from the products that you buy, which is nice, but you’re not going to make a ton.

The only way to make a good amount of money is if you get a lot of people to join through you.

For example having 15 referrals under you would make you a couple hundred bucks a month if they all spend several hundred dollars a month there.

That’s honestly not going to be realistic to anyone who isn’t experienced in affiliate marketing.

If you are looking to make good money online, there are better places to do it at!

Now I want to briefly go over how the profit points system works, because it can be a bit confusing!

That’s not how the Trunited Points Sysem works.

Depending on where you choose to shop you will earn a different percent of purchase in points.

The value of the points varies depending on how much the company makes as a whole for the month.

All of the profits that Trunited makes are then divided into points, and given to the members based on the number of points they have.

So the value of the points varies from month to month.

Is Trunited A Scam Or Legit?

Trunited is a legit and decent opportunity to make money back with the items that purchase everyday.

If you’re someone who does a lot of online shopping, this is something that can definitely help you save money.

However if you are someone who is looking to make a good amount of money online, there are plenty of better options!

I make my entire living online, and I started out just doing it in my free time.

Anyone can succeed as long as they get the proper training, tools and support.

You can get started for free in the same place I started out!

What Do You Think About Trunited? Leave Me Any Questions Or Concerns In The Comments Below!