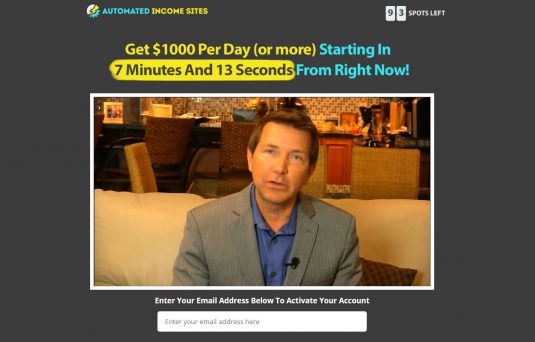 In this review of Automated Income Sites I’ll be going over everything you need to know about it before joining.

Will you Actually make $1,000+ per day, or are they just trying to get your money?

Is Automated Income Sites Recommended? No!

What Is Automated Income Sites?

Unfortunately there is quite a large difference between what Automated Income Sites claims to be and what it actually is.

It claims to be an incredibly easy automated system that will help you to start earning $1,000+ per day within just 72 hours.

He claims that everything has already been done for you, and he’s giving away the entirely automated system away for completely free.

If that sounds way too good to be true, that’s simply because it is.

What Automated Income Sites Actually Is

The simple truth is that Automated Income Sites is just a get-rich-quick scheme that is trying to get as much money out of you as possible.

They make a bunch of unrealistic promises to get you to give them your money, and then they don’t even come close to delivering on the promises.

He goes the entire video claiming that you’ll be getting the entire system for free, but of course there is a catch in video two.

You’ll get his “amazing” system, but you still have to pay $97 to have it hosted.

Which honestly doesn’t even make sense seeing as he claims that the system is already running, which would mean it already has hosting.

Just because something is a scheme doesn’t mean it is all bad, let’s see if there is anything good about this one.

Over the next several sections I’ll be taking the time to go further into detail about all of the points I listed out above.

I’ve been making my living online for a few years now, and I’ve written reviews for literally hundreds of “make money online” products.

As soon as I arrived on the sales page for Automated Income Sites, I knew that it was going to be a get rich quick scheme.

Whenever you you come across something that claims you can make a ton of money online in a short amount of time with little to no effort, they are lying.

It’s simple as that.

Don’t get me wrong, it’s certainly possible to make a lot of money online, but it takes plenty of time and actual work.

This is a shady sales tactic that I see used all of the time in various schemes and scams.

They claim that they are only accepting a limited number of people, to make it seem like you might miss out.

It’s a common tactic used to get you to purchase something quickly without taking the time to actually think about it.

No matter how many people purchase this program before you, they will always take your money.

Like I said earlier, I’ve written hundreds of reviews, and all of the legit ones tell you exactly what you’ll get if you pay.

Automated Income Sites simply doesn’t give you enough information about what you’ll be doing, or how you’ll be making money.

They just claim they have some amazing system, and you’ll start making money by only working 30 minute per day.

But what will you be doing in that 30 minutes?

Another problem I have with Automated Income Sites is the fact that you don’t get everything you need after you pay.

In the videos he makes it seem like after paying the $97 you’ll get a complete system that will make you $1,000 a day.

However after purchasing it you’ll be hit with a bunch of other up-sells that he claims you need to make money sooner?

Do you really need to start making money faster than the 24 to 72 hour that they already promise you?

Well if you do, apparently you’ll have to spend anywhere from $97 to a couple hundred dollars on the offers.

However I strongly recommend you don’t do that, because this simply isn’t worth it.

Is Automated Income Sites A Scam?

This is something that I like to call a get-rich-quick scheme just like Fast Earners Club, Five Minute Profit Sites, and My Traffic Business.

The only thing keeping me from calling this a flat out scam, is the fact that it is possible to get a refund.

Even though you can get a refund, I strongly recommend that you avoid Automated Income Sites.

You’re only going to be disappointed.

Out of the 400+ online money making programs I’ve reviewed, My Top Ranked Program stands above all the rest.

They give you access to all of the training, tools, and support you need to create an online income.

They were the program that helped me build an online income that allowed me to quit my job and work completely from home.

It’s not a get-rich-quick scheme, it takes plenty of time and effort, but if you’re willing to work, you can get started for free.

Is Automated Income Sites A Scam? What Do You Think? Let Me Know In The Comments Below!