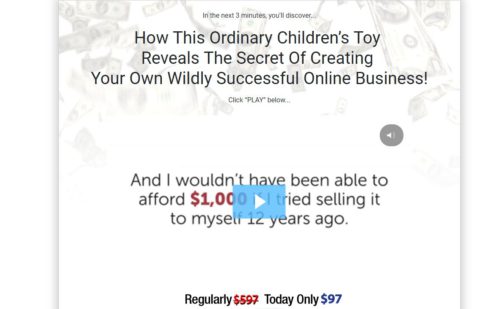 In this quick review of Biz Building Blocks I’ll be going over everything you need to know about it before buying.

In fact while doing research for this review I actually found 4 good reasons why you might want to avoid it all together.

So without further ado, let’s just get into it!

Is Biz Building Blocks Recommended? NO!

What Is Biz Building Blocks?

It claims to give you the secret steps to creating an incredibly successful online business.

Apparently Teo was down on his luck, when a French teen showed him a method for making thousands of dollars online.

So are any of the claims in the sales video true? Or are they just spewing lies in order to get your money?

What Is Biz Building Blocks Really?

As it turns out, Biz Building Blocks isn’t really a system of it’s own, it’s actually a sales page for another system.

As soon as I heard the name Teo Vee, I knew that this was just another gimmicky sales page for My Ecom Club.

My Ecom Club is a technically legitimate E-commerce training program, however that doesn’t mean you should sign up.

There are plenty of problems with it that I’ll be getting into shortly.

There are both good and bad things about this system that you need to be aware of before purchasing.

Over the next several sections I’ll be going further into detail about all of the points listed above.

One thing that I noticed while watching through the sales video is that there are quite a few unrealistic claims.

You need to be aware that making money online isn’t as easy as they make it seem.

I’ve been making my living online for several years now, and I for one know that it’s not easy.

No matter what route you decide to take, it’s going to take plenty of time and effort.

Obviously I can’t prove that it’s not true, but doesn’t the story of his life seem a bit unbelievable?

Well who knows, maybe a French teenager really did teach him how to become rich online.

One thing I can prove is the fact that I’ve seen almost this exact “system” multiple times in the past.

Whether it be Get This Plan, Ecom Cash Code, or The Ecom Freedom Blueprint, they all look incredibly similar.

They all even make incredibly similar claims.

In fact Broke Dishwasher, even uses the exact same story about him being a dishwasher who what trained by a French Teen.

#3: It Could Potentially Cost You Thousands!

If you’re just skimming through this review, make sure you actually take the time to read this section, because it’s important.

While $97 is a relatively large amount of money, it’s only the beginning to your expenses.

The main purpose of that $97 is to get your foot in the door so they can sell you other things.

After working through the initial training you will be hit with several other up-sells.

These up-sells range anywhere from $1,997 all the way up to tens of thousands of dollars.

Not to mention that even with that price tag, they still have incredibly low success rates.

#4: It Could Be Anything

One last thing I want to cover is the fact that you could you don’t really know what you’ll be getting.

The sales video is so shady and vague, that you could literally get whatever they feel like giving you.

Just because My Ecom Club is legit (but not recommended) doesn’t mean that’s what you’ll get when you pay through this website.

Is Biz Building Blocks A Scam?

When it comes down to it, it’s up to you to decide whether or not to call Biz Building Blocks A Scam.

It potentially could lead to a legitimate program, however it uses shady sales tactics, and misleading claims to get your money.

Regardless of whether it can be labeled as a scam or not, it’s definitely not recommended.

If you’re interested in making money online, I suggest you read more about my top ranked program.

They’re a tried and proven company that actually has helped me and thousands of other make money online.

In fact since joining their platform I’ve made enough money to quit my job and work completely from home.

It takes plenty of time and effort, but I’ve yet to find a better program out there.

If you’re interested in learning how to get started for free you can click here to learn more!

Is Biz Building Blocks A Scam? What Do You Think? Let Me Know In The Comments Below!