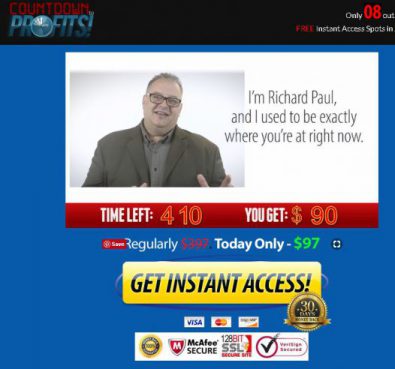 In this review I’ll be telling you what Countdown To Profits Is about, and whether it is a scam or not!

CLICK HERE TO READ ABOUT MY TO RANKED PROGRAM!

What Is Countdown To Profits About?

Countdown To Profits claims that you can earn an insane amount of money online without doing much work at all.

One of the first problems that I have with this system, is the fact they really don’t give you any information at all.

The only thing they do is go out of their way to show people claiming that they’ve made an insane amount of money.

Those videos are fake, I’ll go into that more in a little bit.

For every program I review I try to find at least one good thing about it, but I couldn’t find anything for this one!

The ratio of good to bad things about this program really shows just how crappy it is.

Let’s spend some time going over each of the cons I listed out!

I’ve been writing about and reviewing online money making programs for years now.

I can promise you that there is absolutely no way you are going to make as much money as they say as fast as they say.

Don’t get me wrong, it is absolutely possible to make money online, it just takes longer, and much more work than they claim.

Also be aware that you are not going to get the “guaranteed $500” that they claim from just watching the video.

I know that they tell you that you will have a guaranteed $500 sent to you, and you make that by just watching the video.

However that’s a lie and I can prove it to you relatively easily.

If you scroll to the bottom of the sales page you can see some fine print under the fake Facebook comments.

The $500 will only be given to you if you earn it by follow the “one-of-a-kind training they give you.

This points out two very important things that you need to be aware of.

First, $500 they claim you get by watching the video is a complete lie to get you to give them money.

And second, you won’t be able to earn $500 with the training they give you because it is complete crap!

I know the fact that there are videos of people claiming to make a ton of money is convincing.

But I can promise you that they are all fake paid actors.

In the beginning it was a little hard for me to believe that a scam would go out of it’s way to hire fake actors.

But in reality it isn’t as difficult as it seems.

I don’t know if any of you have heard about the website Fiverr?

Well on that website you can hire people to do various things for you for just 5 bucks.

It just so happens that you can pay actors 5 bucks on there to create a fake testimonial.

And I’m almost 100% certain that’s exactly what the creators of this website did.

Also the Facebook comments are just Photoshopped as well.

This is a tactic that I see constantly used by scams.

They try to tell you that only a limited number of people are allowed to sign up.

They do that so you’ll buy it quickly so you won’t miss you chance when they run out of spots.

This is just an absolute lie.

Trust me, they want as many people as possible to sign up and give them the $97 that they charge.

Trust me, no matter how long you wait the spots will never fill up.

I want to be complete honest and say that I did not spend the $97 to try out this system.

Normally I pay to try out a program before I write a review, however I am almost certain this is a scam.

If you decided to pay the 97 bucks to get access please leave a comment below and let me and other know what happened.

There are just too many red flags for me to justify spending that amount of money just for this review.

However the fake testimonial, false income claims, and other problems are similar enough to other scams I have paid into for me to be almost completely sure it is a scam!

Is Countdown To Profits A Scam?

I hope that after everything I have written, and all of the red flags I have pointed out that you will be sure that Countdown To Profits is a

This is the type of program that gives actual money making opportunities a bad name!

As I briefly mentioned before, it is absolutely possible to make money online.

Anyone can do it, however it actually takes a bit of time and effort.

In order to make money online you need the proper training, tools, and support to succeed.

I found all three of those things and more at My Top Ranked Program!

After joining them I was able to start making enough money online to quit my job and work completely from home.