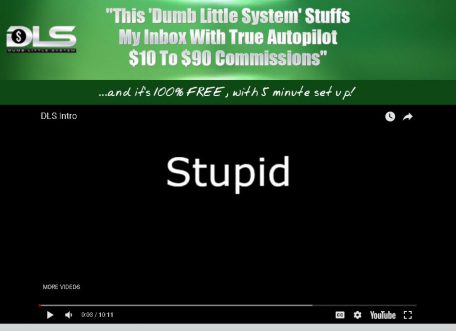 Is Dumb Little System A Scam? No!

What Is Dumb Little System?

He claims that this system is super simple to copy, and once you do you’ll start making unlimited $10 to $90 commissions.

DLS is a Clickbank product, and Clickbank doesn’t often have good products released from their system.

Is Dumb Little System another crappy system, or is it something that’s worth your time and money?

I always like to list out both the good and bad things about a product to help give my reader a better overview.

Over the next few sections I’ll be taking time to go over exactly what I mean with each of these points.

This is the first point that I want to get across to anyone who is thinking about buying this system.

This isn’t one of those crappy systems that claims it’s amazing, then doesn’t back up that statement.

With that being said, this system certainly isn’t perfect, and there are several things you need to be aware of before joining.

The Price And How It Works

Yes the system is free, however there are a few things you’ll have to spend more money on to make the funnel work.

As you go through the steps of the funnel, you’ll have to purchase some other Clickbank items.

The second step requires you to purchase an item of your choice from a list that Bryan gives you.

Once you buy an item, the person who got you to join will earn a commission, but then you’ll move on to the next step where you can then earn commissions.

Next you’ll be required to sign up for a membership for a place called CashBlurbs.

You’ll have to sign up for either the $7 or the $20 per month paid versions.

In this section you’ll earn a commission from the people your referrals referred to the system.

Once you do that, you’ll be at the end and you’ll finally learn how you can make the $90 commissions you’ve been hearing about.

You’ll have to purchase a product called Directory of Ezines, and it will cost you $197.

You’ll be purchasing this so that you can turn around and make an $80 commission on it when your referrals purchase it too.

It’s A Simple And Good Funnel

Honestly I think that this is one of the Clickbank Products that actually lives up to it’s name.

It’s simply is a Dumb Little System, that can actually help you make money.

The steps are easy to follow, however I think some newbies who don’t know anything about marketing or Clickbank might get a little confused.

However it’s nothing too difficult to grasp.

Things To Keep In Mind

Now that I’ve gone over the system, and mentioned that you can make some money from it.

I want to dedicate this section to pointing out something you need to be aware of before you jump into it!

First off, you’ll just be reusing the same system that you signed up through.

You won’t be learning any marketing skills, so if for whatever reason this funnel system closes down, you’ll be out of luck and money.

Second, you’ll be using paid traffic so you’ll constantly have to pay money to have people sent to your funnel.

I’m not a fan of paid traffic because of course you have to pay, but also because it is often not targeted and doesn’t convert well.

The system I use to make my living online, uses free traffic so I don’t have to pay anything to make my money.

And finally, I want you to know that there are ways for you to make money by promoting products without buying them first.

Is Dumb Little System A Scam?

No, DLS is definitely not a scam; it’s not perfect, but it’s not a scam.

This is not something I normally recommend to people who want to make good money online, however if you are someone who is just looking to make a little bit of money online without doing much work, this might be for you.

As long as you have a couple hundred dollars to put up for it first.

In my opinion there are much better and cheaper ways to start making money online, where you don’t have to purchase products before selling them.

If you are serious about making money online, and are willing to put in some time and effort, I have a suggestions for you.

My Top Ranked Program isn’t a push button, or “copy” method, it takes work and dedication.

With that being said, it’s something that anyone can do, it’s free to get started, and it has the potential to help you make a living online.

Since joining them, I’ve made enough money to quit my day job and live entirely off of the money I earn online!

Is Dumb Little System A Scam? What Do You Think? Let Me Know In The Comments Below!