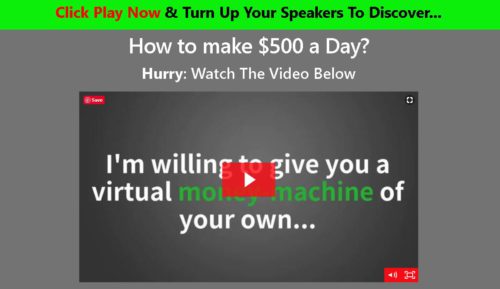 In this review of Profit Point Autonomy I’ll be going over everything you need to know about it before getting out your money.

Will you be able to make anywhere near $500 per day, or are they just lying in order to get your money?

I’ll be answering those questions and many more within this review, so stick around!

Is Profit Point Autonomy Recommended? No!

What Is Profit Point Autonomy?

In the sales video they claim that it is a completely automated system that is completely done for you.

Apparently all you have to do is set it up, sit back, and watch the money flow into your back account.

While that sounds absolutely incredible, the truth is that that is simply not going to happen.

What Is Profit Point Autonomy Really?

The truth is that the creators of this so called “system” just say whatever they think they have to say to get you to give them your money.

However the truth is far from that.

While it is absolutely possible to make good money online, (I even make my living online) it’s not as quick and easy as they make it sound.

Now let’s get into the rest of the review!

Alright, now let’s take a minute to go over both the good and bad things I could find out about this system

Throughout the rest of the review I’ll be taking the time to go further into detail about all of the points I listed out above.

One of the first problems I had with the sales page for this system is the unrealistic expectations it sets.

One of the most important things you need in order to make money online is realistic expectations about it.

When you join a system thinking that you’re going to start making $500+ per day almost right away without doing much work, you’re being set up for failure.

You’ll be more likely to give up when you aren’t making money after a few days or weeks.

However if you go into it knowing that it’s going to take a good amount of time effort before you’ll even see your first dollar, you’re more likely to tough through.

This goes hand in hand with the unrealistic expectations that I was talking about.

As wonderful as it would be to be able to set something up and have it do everything for you while bringing in money, it’s not going to happen.

Don’t get me wrong, there are certainly aspects you can automate, however there will always be work that you have to do, unless you are paying someone else to do it for you.

This is something that I constantly see with scams, schemes, and just low quality systems in general.

They claim that there are only a couple of spots left, so you better hurry before you miss out.

One thing I can promise you is that no matter how many people sign up before you, there will always be more spots.

Do you really think these people are going to turn down your money?

They just want you to sign up before taking the time to do the proper research.

Hopefully you are reading this review before giving them your money!

This is another thing that just about every scam out there does.

They pay some people to create fake testimonials for their program, to make it seems more legit.

I know it can be incredibly convincing when you see a video of someone claiming that a system made them rich.

However now-a-days it is incredibly cheap and easy to have fake testimonials made, so don’t trust everything you hear.

One of the first things I noticed when I arrived was how incredibly similar it was to some other schemes I’ve reviewed in the past.

For example, one of the last reviews I wrote was for a scheme called Point To Click Profits.

Here’s a screenshot of it:

It looks pretty similar except for a few color changes.

Is Profit Point Autonomy A Scam?

At the end of the day there are both people out there who will call it a scam, and some who won’t.

In my honest opinion it seems about as close as you can get to one.

They intentionally lie and mislead you in hopes that you’ll pull out your wallet and give them money.

I strongly recommend that you avoid Profit Point Autonomy!

Like I said several time within this review, you can absolutely make money online, however it’s not as easy and quick as everyone tries to make it seem.

You have to put in plenty of time and effort to do it, but it’s 100% possible to do.

In fact I even make my living online, and even recently bought a house using that income!

If you are interested in learning how, you can CLICK RIGHT HERE, to learn about the training program that helped me get to where I am today!

Is Profit Point Autonomy A Scam? What Do You Think? Let Me Know In The Comments Below!