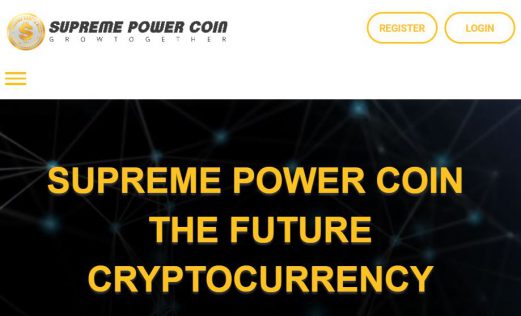 Is Supreme Power Coin a scam or will you actually be able to earn 3% ROI on your investments?

Is Supreme Power Coin Recommended? NO!

What Is Supreme Power Coin?

Supreme Power Coin claims to be a cryptocurrency that you can invest in and earn a great weekly return on the investment that you make.

However in reality it is most-likely an HYIP (High-Yield Investment Program) disguised as a new cryptocurrency.

You won’t actually be investing in a cryptocurrency, you will simply be giving your money to a Ponzi scheme!

Let’s list out some of the good and bad things about this program!

Over the next couple of sections I’ll be going over exactly what I mean with the points listed above!

How It Actually Works

Like a said a minute ago, you won’t actually be investing in a cryptocurrency. Instead you will simply be giving your money to older investors.

Basically a Ponzi Scheme is an illegal scam that simply uses the money newer investors give, to pay people who invested before them.

There is a chance that you will actually get the money that they claim you’ll get, however it won’t be from a cryptocurrency.

It will be from the people who join in and pay after you do.

But what happens if people stop joining?

Eventually all HYIPs crash and burn due to a lack of new investors, or simply because the anonymous creators pick up and run away with the money.

It’s inevitable that at some point the money coming in won’t be enough to pay all of the people who have already invested.

While you might get paid at first, you have absolutely no idea when the program will collapse.

Will it be before or after you earn all of your money back?

I don’t know if you’ve heard of Bitconnect, but it was a huge “Cryptocurrency investment platform” similar to this one.

Well one day it fell through, and people literally lost millions and millions of dollars overnight.

Let’s go over a few things that makes this platform suspicious.

I did a reverse Google image search on the picture of the person claiming to be the founder of Supreme Power Coin, and I found something interesting.

The man in the picture is actually Jay Osmond who was a popular musician several decades ago.

Odds are that they simply found and used a picture of him as a fake owner.

No Return On Real Cryptocurrency

If you have invested in or know much about investing in legitimate Cryptocurrencies like Bitcoin, then you know that ROI’s simply aren’t a thing.

When you purchase them you don’t magically earn money from them every week. The coin that you purchase is your investment, and it can either rise or decline in value.

Why Would They Pay You To Invest?

Have you ever heard of Bitcoin Or Ethereum paying people in order to get them to invest in it? No, people simply invest in it because it has a rising value.

Is Supreme Power Coin A Scam?

There is simply no way to prove that a this place is an HYIP because you can’t see what they do with the money, however there are plenty of things that suggest they are.

If they are one, you might get paid at first, but most of them simply stop paying after a couple months, then run away with the remaining funds.

There are simply too many red flags for me to recommend this place. It’s incredibly similar to programs like Bitconnect and BestCoinInv.

If you are interested in investing in cryptocurrecy I suggest checking out a place like Coinbase, however you should do plenty of research first.

If you are someone looking to make money online, and you’re willing to put in plenty of time and effort, then I have a suggestion for you.

My Top Ranked Program has helped me create an online income that has allowed me to quit my job and work completely from home!

If you are interested in getting started for free, you can….

Is Supreme Power Coin A Scam? What Do You Think? Let Me Know In The Comments Below!