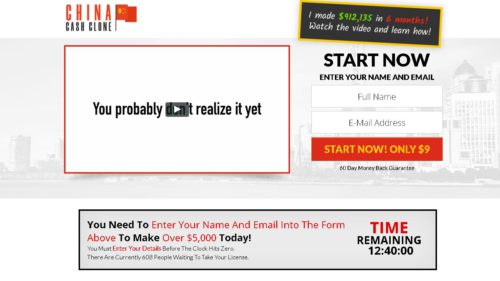 In this quick review of China Cash Clone, I’ll be going over everything you need to know about it before joining.

I’ll be answering all of those questions and more within this review so stick around.

Before we jump in, I just want to suggest that you read about what I think is the best way to make money online!

Is The China Cash Clone A Scam? Debatable (I’ll Explain)

Is The China Cash Clone Recommended? NO!

What Is The China Cash Clone?

They claim that it exploits a little known glitch in the internet, that people in China use to become “Mega-Rich”

Apparently it has the ability to make you insane amounts of money incredibly quickly.

It’s supposedly created by a guy named “Daniel Barber”, who’s living the big life thanks to this system.

What Is The China Cash Clone Really?

From the word choices I used above, you might’ve gotten the hint that The China Cash Clone isn’t exactly what it claims to be.

In reality, The China Cash Clone is a get-rich-quick scheme that makes crazy claims in an attempt to get your money.

They’ll basically tell you whatever you want to hear to get you hyped up enough to pull out your wallet.

You’re not going to make $5,000 today, and neither did any of the people claiming they did on their website.

What you’ll get is some very basic training that revolves around drop shipping, and is no where near enough training to actually succeed.

I’ll be going much more into detail about these ideas shortly.

I’m sure you’ve already been able to guess that I’m not a fan, however I want to be as fair as possible to it.

Throughout the rest of the the review I’ll be going further into detail about all of the points that I listed out above.

#1: Drop-Shipping Is Difficult & Getting Harder

While drop-shipping is certain a legitimate way to make money online, it can be overwhelming and very difficult.

There are a whole lot of things you have to deal with such as tracking shipments, dealing with lost or cancelled orders, invoices, customer support, and a whole lot more.

You need to be aware of the immense amount of effort and time it’s going to take, and their sales video certainly doesn’t prepare you.

Drop-shipping have become incredibly popular recently which is one of the reasons why it’s getting harder to break into.

Not to mention you will have to compete against stores like Amazon, Walmart and others who offer free 2-day shipping, and difficult to compete with prices.

I’m not saying it can’t be done, because it 100% can be, I’m just saying their are other easier ways to make money online such as Affiliate Marketing.

Which allows you to earn commissions from recommending products from websites like Amazon and Walmart.

That way you are working with them, instead of against them.

When it comes to any type of store making money, what would you say is the most important factor?

I would say that it’s having a good amount of customers who are wanting to purchase things.

And that’s the truth for online stores and drop-shipping as well.

You can’t make any money if no one is visiting your website in the first place.

Heck, My Top Ranked Program is basically entirely about getting free traffic to you websites.

So you would think that China Cash Clone would have an extensive training segment all about getting traffic right?

Wrong, they don’t have any.

If you want to learn about the most important aspect of making money online, you’ll have to pay $177 to purchase an up-sell called Cash Clone X.

Which probably isn’t enough training to help you succeed either, especially because the method isn’t going to work for your copied online store.

As amazing as it would be to be able to join this system and start making $5,000 per day right away, it’s simply not going to happen.

As i’m sure you’ve realized by this point in the review, there is a whole lot that goes into an online store.

You’re certainly not going to learn all of it in one day, let alone be able to implement all of it.

They claim that it’s some kind of glitch that will allow you to succeed, but that’s a bunch of crap.

There is not some secret that someone has that will automatically help you succeed.

There are just a bunch of little things that you need to understand and implement proper in order to even stand a chance at making money.

Seeing video snippets of people claiming to be rich thanks to a system can be very convincing.

That’s why the creators of systems like this go out of their way to hire actors.

The (not so) funny part about it is that you can get people to create this video for very small amounts of money.

The image above is a screenshot of a woman claiming to have made a ton of money with the China Cash Clone.

While the image below is the same woman offering to make a spokesperson video on a website called Fiverr.

The same goes for all of the other testimonials within the sales video.

One thing I always try to do for my reviews is find out as much as I can about the creator/creators.

However I had an incredibly difficult time finding any information about Daniel Barber.

You would think that the millionaire creator of an incredibly successful online training program would have some information about him out there.

In reality, Daniel Barber is most-likely a made up name used to hide the real creators identity.

Probably so he can’t be held accountable by the people who purchase this and are disappointed.

Also so he can continue to make other schemes like this one over and over again.

Is The China Cash Clone A Scam? – Conclusion

At the end of the day, it comes down to what your definition of a scam is.

They make constant unrealistic claims, spew lies, and use other shady tactics to get you to purchase something that isn’t anything like what it claims to be.

However on the other hand, you will receive some basic training in return for you money.

Would you consider that a scam?

I would consider it to be a get-rich-quick scheme at the very least. Just like Income Sites Online, Affiliate Advisor Group, and 12 Minute Affiliate System.

There is no way I would ever feel comfortable recommending something like this to my readers.

If you are someone looking for a much less difficult way to make money online, you might want to looking into affiliate marketing.

You’ll be able to earn commissions from recommending other people products and services.

That way you won’t have to worry about any invoices, shipping, tracking, returns, damages or anything like that.

You simply recommend products you like, and if someone uses your link to purchase something, you’ll earn money.

While that sounds incredibly simple, there is still a whole lot you need to learn.

Which is why I recommend you check out My Top Ranked Program.

Is The China Cash Clone A Scam? What Do You Think? Let Me Know In The Comments Below!