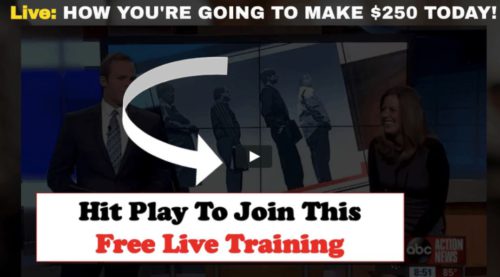 In this review of Jeffrey’s Fast Lane I’ll be going over the things you need to know about it before paying.

Will you really make $250 today? Will you make any money at all?

Or is it just a scam that will say anything to get your money?

I’ll be answering all of those questions and many more within this review, so stick around.

I’ve reviewed hundreds of online money making programs, and I’ve come up with a solid Top Program if you’re interested!

Is Jeffrey’s Fast Lane Recommended? NO!

What Is Jeffrey’s Fast Lane?

Jeffrey’s Fast Lane claims to be an incredible online money making system that will rake you in $250 today and everyday.

Apparently Jeffrey has already setup a website funnel for you, and it’s already generating income.

All you have to do is finish the video, and pay money to get access to it.

While this all seems incredibly exciting, the truth is far from that.

Well the unfortunate truth is that what it claims to be, and what it actually is are two completely different things.

The sales video uses a bunch of get-rich-quick scheme tactics to get you excited to give up your money.

They try to make it seem incredibly fast and easy to become rich, when in fact that’s far from the truth.

Don’t get me wrong, it’s certainly possible to make good money online, I even make my living online.

At the end of the day, not everything about Jeffrey’s Fast lane is bad, there are a couple of good things.

Throughout the rest of the review I’ll be going much further in detail about all of the points listed above.

Even though I’ve already touched on this point, I really want to make it crystal clear to you.

The sales video is basically just a bunch of get-rich-quick scheme sales tactics and lies.

There is no system in place that’s already generating you money, you certainly aren’t going to make $250 today, and most-likely won’t with system.

If you purchase the system, you will get access to some helpful information and training, but it’s nothing like what they claim.

And honestly probably isn’t enough to help you succeed with dropshipping.

In the video he tries to make it seem like you just have to clone his website, and you’ll be rich.

In reality, that simply doesn’t work.

While you can absolutely make tons of money by having a successful website, cloning someone else’s won’t work.

If you could really clone Jeff’s website, don’t you think he would just make thousands for himself?

You know how much money he would be making?

There are several reasons why this doesn’t work, but I’m not going to get into that now.

Dropshipping Is Harder Than They Claim

Jeffrey makes it seem like you’ll just be copying exactly what he does, and you’ll be rich just like him.

Well I’ll tell you right now, there’s a lot more to it than just copying and pasting some stuff.

Yes, you will be getting a pre-built website when you pay for the system.

But building a website is one of the easiest things to do now-a-days.

There are tons of other more difficult hurdles you’ll have to surpass, including getting traffic.

Traffic to your store is the most important part of making money, but it’s also the hardest, and in this case, most expensive.

You’ll be using paid traffic to send visitors to your website.

Paying for quality ads requires a large budget, and there’s a huge learning curve for it.

It’s easy to waste a ton of money on it.

For every system I review I try to find out as much as I can about the person or people behind it.

In this case, it was difficult because he doesn’t give his full name.

All you get is Jeffrey “marketing” at one point in the video.

Since I can’t Google his name, the only things I can go off of is his words in the sales video.

And I’ve already pointed out that most of the things said in the video are either misleading, exaggerated, or a complete lie.

There is absolutely no reason to trust him.

There’s basically nothing within the sales video that I haven’t seen somewhere else.

For example, the news segments at the beginning.

I’ve seen those exact same clips used in dozens of other schemes.

They are legitimate news clips, however they have nothing to do with Jeffrey’s Fast Lane.

It just straight up reminds me of other “systems” like 10 Minute Paydays, My Home Cash Club, and Profit Point Autonomy.

Not to mention it even uses the same fake testimonials as Affiliate Advisor Group!

Is Jeffrey’s Fast Lane A Scam?

I know that this is an annoying answer, but it’s up to you to decide if you want to call it a scam.

The sales page is wildly misleading, and what you’ll actually get is completely different from what’s promised in the video.

However if you do buy it, you’ll at least get SOME training, and the ability to get a refund within 60 days.

That training most-likely won’t be enough for you to succeed, but you’ll be getting something.

Regardless of whether or not you can technically call it a scam, it’s not something I would ever recommend buying.

If you’re interested in making money online, there are plenty of other programs out there better than Jeffrey’s Fast Lane.

They give you access to all of the training, tools, and support you need to succeed online!

Not to mention you can get started with it for completely free!

They helped me build an online income that’s allowed me to quit my job, and work completely from home!

It takes plenty of time and effort, but if you’re interested in learning more, you can

Is Jeffrey’s Fast Lane A Scam? What Do You Think? Let Me Know In The Comments Below!