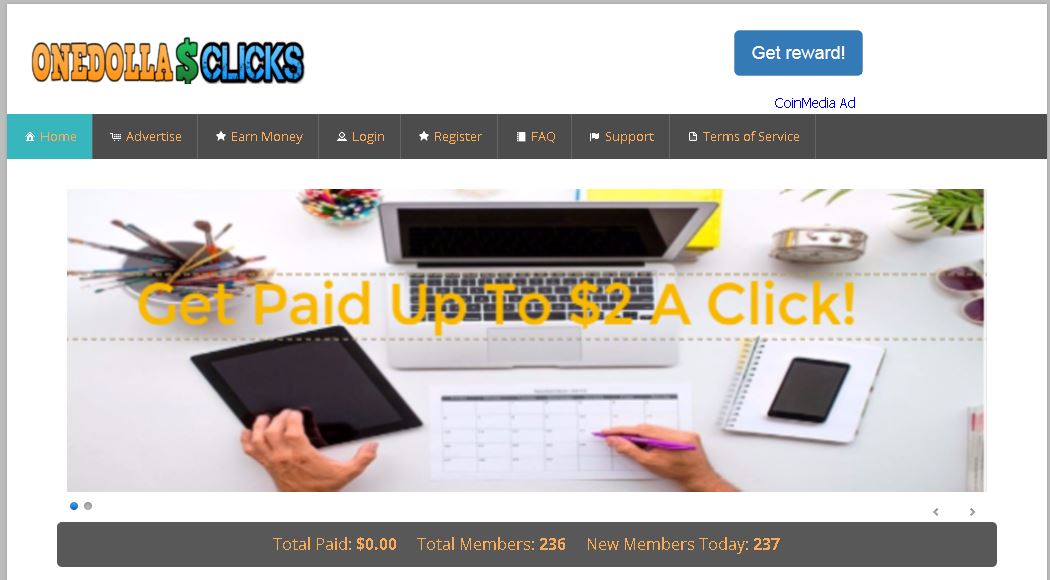 One Dollar Clicks claims to pay a crazy $1 per click, however there are several things you should know before buying!

What Is One Dollar Clicks?

PTC websites will pay you to click on various ads and other links.

Some of these websites are legit, however most of them will pay you only a fraction of a cent per click.

You would be incredibly lucky to find something that pays $0.02 per click.

This is why One Dollar Clicks seems like a load of crap, but let’s dive deeper to learn more!

One thing that helps figure out if a program is legit is to list out the good and bad things about it.

Now I’m going to take some time to go into what I mean with each of these points.

As I said before, there are actually some websites out there that will pay you for clicks.

However there are a few differences between those and One Dollar Clicks.

Where you have to literally click on thousands of ads to make any type of notable money.

This makes me almost certain that they will not pay you when the time comes to get your money.

Not a single one of them has ever actually paid out!

Associated With Other Scam Websites

That’s right, it was being advertised on one of the other scam websites I’ve already reviewed.

They claim that One Dollar Clicks is a “sister site” to them, which is just even more proof.

The face of the matter is that 1 Dollar Adz has been called out for being a scam, and they are probably losing traction.

That’s most-likely why they created ODC to hopefully restart all of the success they had scamming people.

I’ve stumbled across One Dollar Clicks in it’s early stage, so there is not yet a way to prove that they won’t pay.

However I am as certain as anyone can be that they won’t give you the money that you earn.

I mean they already have an obvious lie, how can 237 of your 236 members be new?

Anyways, not paying out was the main complaint about their sister website.

ODC doesn’t have any information on it’s website yet about how they go about paying out.

Yet I’m certain they will claim that there is a 30 to 60 day payout wait.

They do this so that they can get as much work out of you as possible before you realize it’s a scam.

We probably won’t start seeing complaints about this for another couple months after me writing this, so be sure to comment below with your experience.

Is One Dollar Clicks A Scam?

Like I just said, they haven’t been around long enough to find out if they will actually payout.

So I can’t without a doubt say that it’s a scam yet, however I can tell you that you should absolutely

They are a sister site to a scam that doesn’t pay out, and I’ve never seen a website actually pay $1 per click.

If you still decide to try them out, let me know what happened in the comments.

While you can make some money clicking on ads, you will never be able to make a living off of $0.002 per click.

However there is a way to make a living online as long as you are willing to put in some real time and effort.

I know this because I make my living online only working about 2 to 3 hours a day.

Any one can do it as long as you have the proper training, tools, and support.

If you want to learn where I get all of those things, and where you can get started for free, you can click here to learn more!

Tell me your stories about One Dollar Clicks in the comment below!