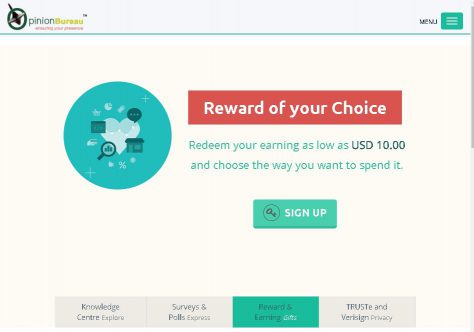 In this quick review of Opinion Bureau I’ll be going over what you need to know before joining.

Are they just another scam survey site that won’t pay you, or will you actually get the money you earn?

Is Opinion Bureau A Scam? No!

What Is Opinion Bureau?

They allow you to earn rewards and money by giving your opinion through the use of online surveys.

Various companies will pay them to ask consumers questions that will help them better their products and services.

In return they will pay will you a portion of that money to answer the questions.

Signing up for Opinion Bureau is as simple as it normally is to sign up for a survey website.

After that you will be able to receive and choose surveys that will pay you varying amounts of money.

Let’s go over some of the good and bad things that I could find with Opinion Bureau.

Over the next few sections I’ll take the time to go into detail about what I mean with the points listed above.

How Much Money You’ll Be Making

When it comes to survey websites, Opinion Bureau pays pretty good for their surveys.

However you still shouldn’t be planning on making much money.

With Opinion Bureau it seems like they tend to pay anywhere from $2 to $5 with the possibility of making up to $10.

The amount of money you’ll make will depend on how long the survey takes to complete.

Even though they tend to pay quite a bit for their surveys, you shouldn’t get too excited because you probably won’t get that many.

Let’s go over some of the common complaints that I’ve seen members make about the website.

Even though the surveys will pay you $2 to $5 a piece, you shouldn’t be expecting very many.

I’ve seen many complaints from members saying that they almost never receive surveys.

When you do get a survey to take, there is always the chance that you’ll be disqualified from it.

I’ve seen many disappointed members say that they receive the occasional survey, however they always get disqualified from them.

Each survey is targeted towards a specific demographic, and if you don’t fit in, you won’t be able to take the survey.

This seems to be a fairly common complaint from from members.

They claim that their money took a long time to be deposited into their account.

Some people even claimed that they never received their money, or they had to contact the company several times before they did.

This is a common complaint with many survey companies, however it’s still something you should be aware of.

Is Opinion Bureau A Scam?

There are a lot of angry users out there that will claim that Opinion Bureau is a scam, however I don’t consider them to be one.

With that being said, I personally think that you will be spending way too much time working on their website to earn such small amounts of money.

If you are set on taking surveys I suggest you check out Pinecone Research or Toluna, however if you want to learn how to make REAL money online, I suggest you keep reading.

If you are tired of spending a ton of time completing surveys for pocket change, then I have a suggestion for you.

My Top Ranked Program has helped me earn enough money online to quit my job and work completely from home.

It takes plenty of time and effort, but if you are willing to put in the work, I’m confident you can succeed.

The best part is that it’s completely free to get started!

Is Opinion Bureau A Scam? What Do You Think? Let Me Know In The Comments Below!

7 thoughts on “Is Opinion Bureau A Scam Or Legit? [Quick Review]”