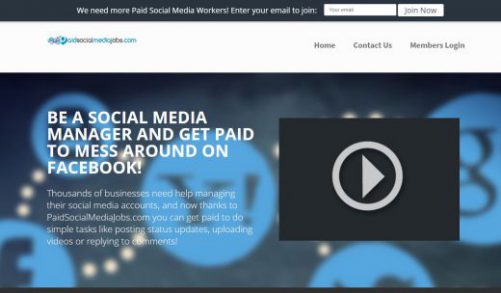 In this quick review of PayingSocialMediaJobs.com I’ll be going over what exactly it is, and telling you if I think it’s worth your time.

Will you actually “get paid to mess around on Facebook?”

Let’s look into it and find out!

Is PayingSocialMediaJobs.com A Scam? Debatable

Paying Social Media Jobs claims to be a website that can help you find jobs that will help you make money from social media websites.

They claim that you can get paid for doing simple tasks like posting status updates, uploading videos, and replying to comments.

Apparently a single mother named Annie Jones has been able to get out of debt and make $700 per week doing this.

Is this really as good as they claim it is, or are they just lying to get your money?

Let’s go over some of the good and bad things I could find out about Paying Social Media Jobs.

Over the net few sections I’ll be going further into detail about the points that I just listed out above.

Not As Amazing As It Sounds

There are actually people and businesses that will pay you money for completing random tasks on various social media networks.

However making money with these jobs is no where near as amazing as they make it sound.

They make it seem like after joining you’ll quickly be able to start making hundreds of dollars a week doing crazy easy tasks.

That’s simply not the case.

Everyone on the internet wants to get paid money online for doing a bunch of little tasks on social media.

For that reason there is a lot of competition to secure jobs, which can make it incredibly difficult to find good paying ones.

While there are jobs that will pay you $20-$30, most of the jobs you’ll complete will pay much less than that.

While you can find some good paying social media jobs, they require actual skills and time.

If you want to be able to lock in the good paying jobs, you’ll have to prove that you have specific skills, and you’ll have to take the time to do them.

Just look at the jobs posted in this screenshot that they show on their sales page. 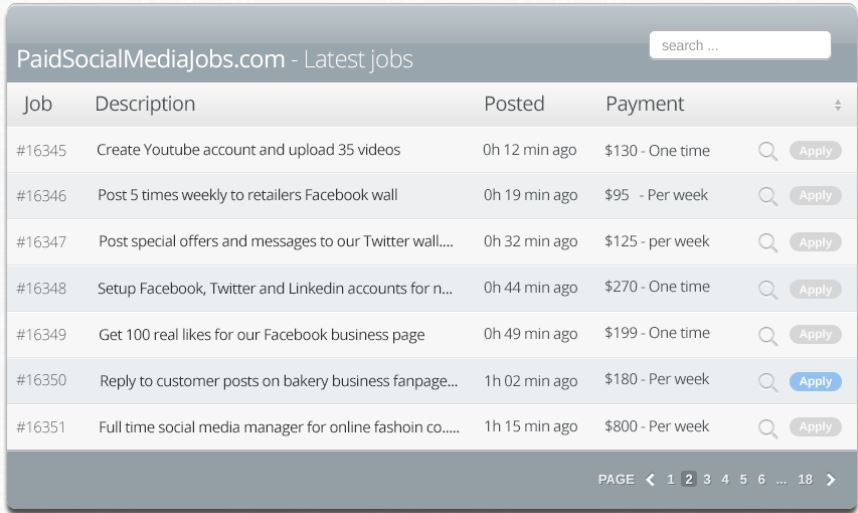 The people who posted those jobs will be looking for people who have experience in those fields, and can prove that they are capable of handling it.

They seem to have quite a few social media jobs on their platform, the problem is you can find those jobs on other websites for free.

There are plenty of other free websites out there like Fiverr, Upwork, and Truelancer that will help you find social media jobs, and other freelance work for that matter.

Those websites are much more popular which means you’ll find more jobs, and potentially better paying ones.

In the beginning I thought that Paying Social Media Jobs was a scam because it has a lot of shady things that scams often have.

They use a stock photo as a woman named Susan who has supposedly paid off her debts, and makes $700 per week. 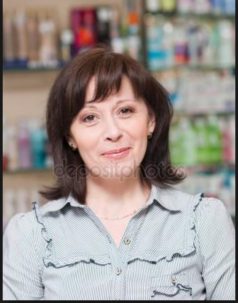 Regardless of whether she is real or not, I’ve lost a bit of trust for them seeing as they didn’t use a real picture.

They also use unrealistic income claims to make you think that you’re going to be making a ton of money. 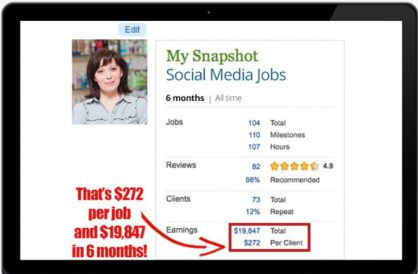 There is absolutely no way you will be making $272 per job especially not in your first 6 months, that’s simply ridiculous!

Any person who has done freelance work online in the past knows that it’s no where as easy or amazing as they make it sound.

Especially not for someone who is just starting out!

Personally I don’t consider Paying Social Media Jobs to be a scam. If you join, you will be able to find jobs and possibly even make some money.

With that being said, it’s still not something that I recommend.

It won’t be anywhere as easy as they claim, you won’t make as much as they claim, especially not in the beginning, and you can find the same jobs in other places for free.

If you’re interested in being a freelancer I recommend checking out places like Fiverr, Upwork, and Truelancer.

However if you’re interested in making money online working for yourself, then I have another suggestion.

My Top Ranked Program will teach you how to start your own online business, and eventually become a person who pays freelancers.

They give you all of the training, tools, and support you need to successfully make money online.

Since joining them I’ve been able to make enough money online to quit my job, and I’ve even paid freelancers to do certain tasks for me.

It’s free to get started, and you can…

Is PayingSocialMediaJobs.com A Scam? What Do You Think? Let Me Know In The Comments Below!