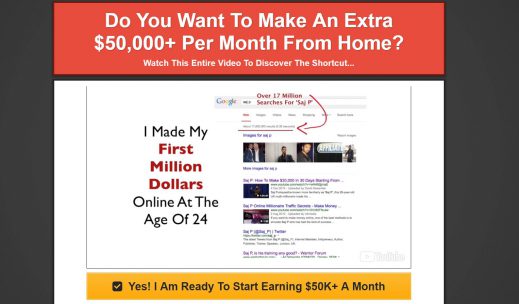 In this review of High Ticket Wealthy System I’ll be going over what you need to know before joining, and telling you if I think it’s a scam or not.

What Is High Ticket Wealth System?

High Ticket Wealth System claims to be a system created by Saj P, and it makes a lot of really huge and exciting claims.

Apparently he has a system that will help you make $50,000+ per month from home with no website, no selling, and no technical skills.

The sales video honestly makes it sound like an incredibly opportunity without any downsides to it.

Is it really as good as they make it seem, or is there a catch?

Let’s dig deeper and find out!

Let’s go over some of the good and bad things that I could find out about High Ticket Wealth System.

Throughout the rest of this review I’ll be going over exactly what I mean with the points I listed out above.

First off, I want to be very clear and tell you that it is possible to make money with the system that you’ll be paying for.

With that being said, that is only a very small percentage of the people who join the system.

The High Ticket Wealth System sales page makes it sound like you are basically guaranteed to make $50k/month, and it’s incredibly difficult to fail.

When in reality it is the exact opposite.

There are many reasons why it is incredibly difficult to succeed with the system, but the main one is because it’s so expensive.

As you probably noticed on the sales page, the real program that you’ll be signing up for is MTTB/MOBE or My Online Business Education.

Well the fact that you have to spend a lot more money than that before you have to opportunity to make those sales.

Here are the prices you should be expecting to pay:

The truth is that these prices are just ridiculous, and their are simply better and cheaper programs out there!

Basically Saj P is an affiliate of MOBE, and High Ticket Wealth System was created for the sole purpose of getting you to join MOBE.

Saj P will make money for each person that he gets to sign up, and that’s how you’ll be making money if you join.

You’ll be making money by getting other people to sign up and pay for the various membership levels that MOBE offers.

The problem is that you’ll have to sign up and pay for each membership level before you can get paid to get other to.

It’s Harder Than It Seems

I know it’s incredibly easy to get super excited about making a ton of money online, but it’s no where near as easy as they make it sound.

They try to make it seem like almost everything is done for you.

While you will be getting done for you lead capture systems, email campaigns, a success coach, and a phone sales team, it’s still not as easy as that makes it seem.

The main thing that they don’t do for you, just happens to be the hardest part of the entire process, and that’s getting traffic/people to your offer.

Not to mention you’ll have to get thousands and thousands of people to your offers seeing as most people won’t have $10,000+ laying around to pay for the memberships.

I also want to quickly point out that your “success coach” will just be a member of their phone sales team.

Their main goal will be to get a sale from you by getting you to spend more money by upgrading your membership.

After doing some looking around I was able to find a earning chart from MOBE that shows an overview of what their members make. 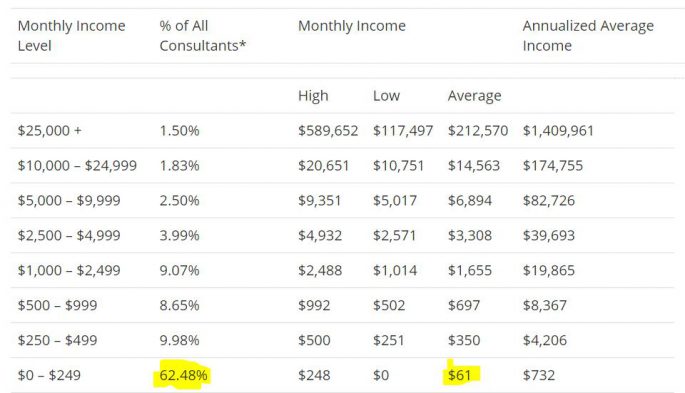 While there are people who make $10,000 to $50,000 per month using their system, it’s a very small percentage of their members.

I highlighted what I think is the most important thing, and that’s the fact that 62.48% of their members make an average of $61 per month.

It’s impossible to see how many of those people make $0, or how much each of them have spent on the program.

When it comes to whether High Ticket Wealth System is a scam or not, it’s honestly debatable.

It has a lot of misleading claims, and leaves out a lot of important information that you need to know before joining, such as the high price tags.

You’ll really be signing up for MOBE which I personally don’t consider to be a scam, however a lot people who have lost their lifesaving to them claim otherwise.

There are hundreds if not thousands of websites similar to High Ticket Wealth System that promote MOBE, here are a few I’ve recently reviewed: Secret Society Of Millionaires, Mobile Success Training, and My 7 Figure Nest Egg.

If you’re still thinking about joining please do more research first, and don’t spend any money you can’t afford to never see again.

If you’re interested in making money online WITHOUT spending thousands of dollars, I have a suggestion for you.

My Top Ranked Program gives you all of the training, tools, and support you need to make money online, and you can get started for free.

Their training has helped me build an online income that has allowed me to quit my job and work completely from home!

Is High Ticket Wealth System A Scam? What Do You Think? Let Me Know In The Comments Below!