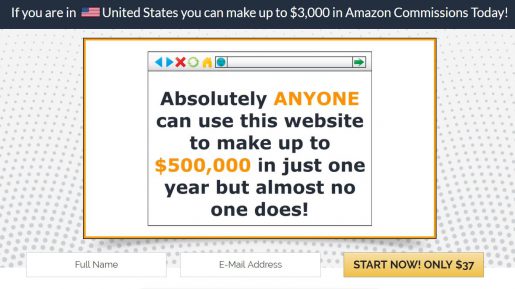 In this quick review of The AZ Code I’ll be going over everything you need to before making the decision to purchase it or not.

Will you actually be able to make $3,000 today, or are they just lying to get your money?

Is The AZ Code A Scam? Debatable

Is The AZ Code Recommended? NO!

What Is The AZ Code?

The AZ Code aka The Amazon Code claims to be a “secret system that can help absolutely anybody make up to $40,000 monthly in Amazon commissions”.

Apparently it was created by a man named Andrew Peterson and he claims that it is an incredibly simple system that already has everything done for you.

Is anything that he says in the sales video true, or is he just telling you what you want to hear so he can get your money?

Unfortunately most of the claims in the video are false, but there is some truth in there.

In this review I’ll be going over what’s true, what’s misleading, and what’s a lie.

Before we get too far into the review I want to give you an overview of the good and bad things I could find.

Throughout the rest of the review I’ll be going further in depth about the points that I listed out above.

While this system seems to be based around an actual way to make money online (affiliate marketing) it isn’t very realistic about the way it talks about it.

They multiple claims on both the sales page and in the sales video that you’ll be able to make tons of money in incredibly short amounts of time.

For example, right at the top of the page they claim that you can make $3,000 in Amazon Commissions today.

I make my living online as an affiliate marketer, so I know a few things about, and one of those things is the fact that it’s not something that happens overnight.

It simply isn’t possible to make anywhere near that much money in such a short amount of time.

Another thing I know about affiliate marketing is the fact that it is no where near a simple as they make it seem.

They make it seem like you’ll be able to just make a few clicks, and you’ll suddenly start raking in thousands of dollars.

That’s simply not how it works.

It’s not difficult if you get the right training, but there is a whole lot to learn, a whole lot of work to do, and a lot of time to put in before you can expect to start making money.

The simple truth is that there is no “completely done-for-you system” out there.

I’ve tried many programs that claim to be one, and haven’t had success with any of them.

Another huge red flag I want to point out about The AZ Code is the fact there is almost no information about how the system works.

The only information we really get is the fact that it involves affiliate marketing through Amazon, but how will you be doing it?

There are a lot of ways to get affiliate commissions like creating websites, using email marketing, video marketing, and social media marketing.

Not to mention each of those methods has various different ways of going about utilizing them, so what will you be doing?

Well, according to the sales video… it’s a secret.

That’s just bull crap, I’ve reviewed hundreds of online money making programs, and all of the legit ones tell you exactly what you’ll be doing before everything else.

One thing that might’ve played a huge roll in convincing you that it’s legit is the video testimonials from users who have made thousands.

Well hopefully the fact that they are all fake will convince you to think twice before joining.

When I first saw the testimonials I immediately recognized many of them from various scams that I’ve reviewed in the past. 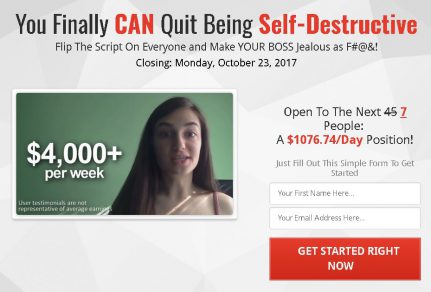 The screenshot above is from a huge scam I reviewed in the past called Seven Figure Profit Code and the picture below is a capture from a website called Fiverr where she advertises her services.

All of the other “members” in the sales video are actors who can be found on the same website as well. 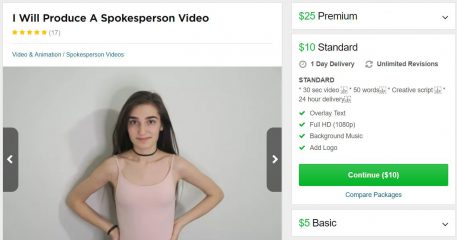 Another thing you need to know before paying the $37 is that you’ll be pressured into and possibly required to purchase more expensive items.

They have an affiliate page for ClickBank that claims that their affiliates will make up to $199 per sale.

If their affiliates are able to make $199 per sale, then odds are that you’ll be forced to pay quite a bit more than that.

The good news is that if you purchased it and don’t like it you can contact ClickBank and utilize their 60 money back guarantee.

Is The AZ Code A Scam?

I want to be perfectly honest and let you guys know that I didn’t actually purchase The AZ Code simply because of all of the red flags I listed out above.

So I can’t for sure call it a scam, but I can recommend that you stay away from it.

While they might have some training or something that can help you learn about affiliate marketing, and possibly make some money, it will be absolutely nothing like the sales video claims.

If you’re interested in making money through affiliate marketing then I suggest you check out My Top Ranked Program.

They give you all of the training, tools, and support you need to succeed at making money online.

Since joining them I have been able to build an online income through affiliate marketing that has allowed to quit my job and work completely from home!

Is The AZ Code A Scam? What Do You Think? Let Me Know In The Comments Below!