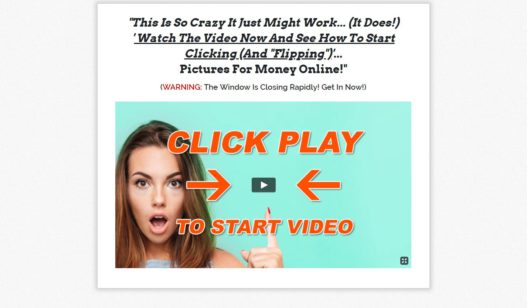 In this review of Click N Flip I’ll be going over several reasons why you shouldn’t trust them, and why I think they should be avoided.

Is anything they say in the video true, or are they just saying what you want to hear so they can get your money?

I’ll be going over those questions here shortly so stick around through this review.

Click N Flip is found at n-drousto.com (possibly other websites as well) and it claims that you can make a ton of money online by “flipping pictures.”

The spokesperson in the video claims to be a man named Teo Vee, and apparently he was taught how to make money online by a “14 year-old French Genius.”

As someone who has made a living online for the past couple years these claims seemed absolutely ridiculous right off the bat.

However I decided to stick around and watch the entire video just to see if anything got better, but it simply didn’t.

The sales video is full of lies, misleading information and complete non-sense, and I’ll be going over all of that soon.

I always try to be as fair as possible to each program I review, even if it’s ridiculous, and come up with both pros and cons.

Throughout the rest of the review I’ll be taking the time to go further into detail about all of the points that I listed above.

I arrived on the website through a link in a shady email that I received the other day.

As soon as I arrived to the website I was suspicious of if because it looks almost identical to several other scams I reviewed in the past.

Money Miracle System, Ecom Cash Code, and Discover The Plan are all “systems” that look similar and make similar claims.

Here’s a screenshot of one of them: 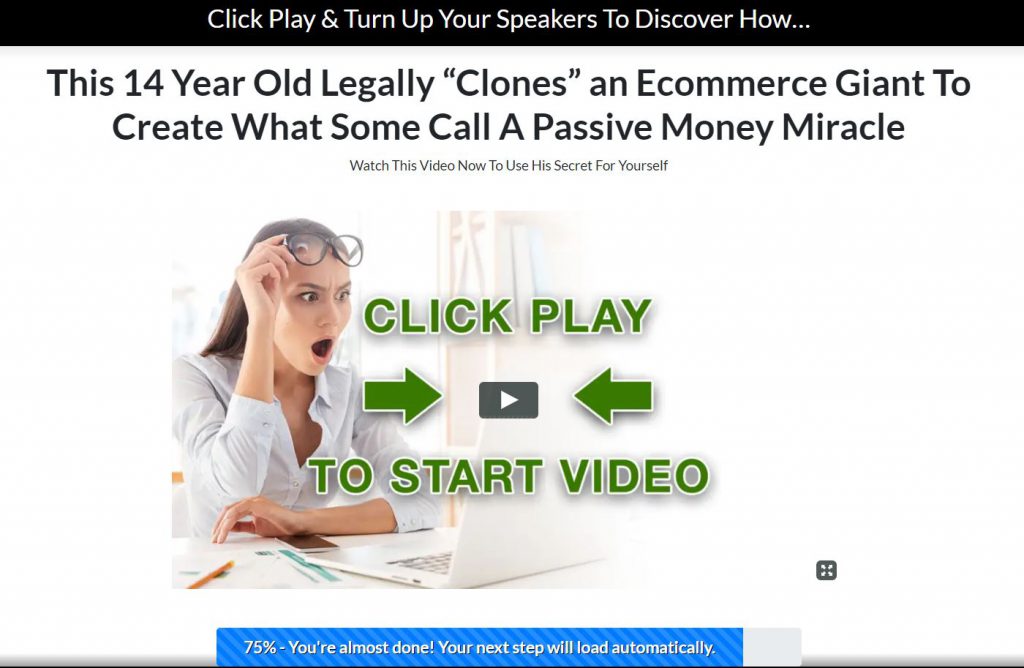 Not a single one of them turned out to be anything like what they claimed to be. 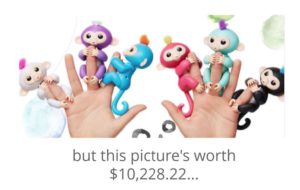 Like I mentioned earlier, I make my entire living online, so I’m always open to finding to ways to make extra money online.

However the claim that you can make insane amounts of money online just from “flipping pictures” doesn’t make sense.

The only legit thing that remotely sounds like what they are talking about is putting ads on your website to make money.

However he says something about the picture flipping when someone clicks on it, and some other things that are just non-sense.

They are simply trying to take advantage of people who don’t know anything about how money is actually made online.

Teo Vee is actually the creator of an e-commerce business called My Ecom Club, and it revolves around creating drop shipping websites.

That’s the actual program that you’ll be signing up for if you decide to shell out the $47 that they’re asking for.

So to clarify, Click N Flip isn’t actually a program that you’ll be signing up for. It’s a sales funnel that was created to get you to sign up for something completely different.

You won’t be “flipping pictures” or anything like that, you’ll be building an e-commerce drop shipping business.

I wrote a full review about My Ecom Club in the past and I don’t recommend it to my readers for several reasons.

The most important of which is the fact that it gets incredibly expensive.

The $47 is simply a small fee to get your foot in the door, after that the prices raise exponentially.

In order to make any money from what they offer you’ll have to shell out $1,997 to continue to the “next step.”

After that some members have even claimed that they were offered packages that range up in the 10’s of thousands of dollars.

You can read more about it in my review right here, and check out the comments from past members at the bottom of the page.

Just because some people are signed up for My Ecom Club when they buy into Click N Flip doesn’t mean you will.

I want to emphasize the fact that just about everything they say in the sales video is a complete lie.

Which means that they could sign you up for just about any program they want to, including much worse scams.

At the end of the day it’s up to you to take the information I gave you above and decide for yourself as to whether you think Click N Flip is a scam.

Personally I consider it to be a scam because they simply lie and mislead you into joining a program that’s nothing like what they claim.

At the very least I recommend that you avoid Click N Flip!

If you are looking to make money online there are simply far better, and much less shady places to learn how to do it.

If you’re a beginner who’s interested in actually making money online then I have a suggestion for you.

My Top Ranked Program gives you all of the training, tools, and support you need to actually make money online.

Since joining their program I’ve been able to quit my job and working completely from home!

It’s important that you understand that it’s NOT some “get-rich-quick scheme”, those don’t actually work.

If you want to make money online you’ll actually have to put in a good amount of time and effort.

Is Click N Flip A Scam? What Do You Think? Let Me Know In The Comments Below!