In this review of CryptoLogic Bot I’ll be going over everything you need to know about it, and answering the question “Is CryptoLogit Bot A Scam?”

Is it really risk free, or are they just trying to take your money?

Is CryptoLogic Bot A Scam? YES!

Is CryptoLogic Bot Recommended? NO!

What Is CryptoLogic Bot?

CryptoLogic Bot claims to be a trading software that will help you earn incredible amounts due to it’s 87% trade win-rate.

The idea behind it is that it has a ground breaking algorithm that will trade cryptocurrency assets with binary options.

When the truth of it all is that it’s a huge scam that is simply trying to get as much money as possible from you.

Let’s go over some of the good and bad things that I could find about this “software.”

Over the next few sections I’ll be going further into detail about the points that I listed above. 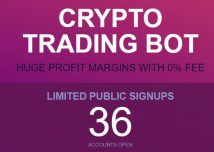 One thing I wan to make very clear is the fact that there are not a limited number of positions for this software.

No matter how many people sign up before you, they will always take your money an allow you to sign up.

Scams like this one only claim that there are a limited number of positions to make you panic and join before researching.

Hopefully you are reading this before making the $250 deposit.

There are plenty of scams out there that claims that they are 100% automatic. However I have not found a single one of them that actually works.

I’ve reviewed well over 100 programs that claim to do everything for you, and not one of them has made me any money.

The simple truth is that if you want to actually make money online, you’re going to have to put in a good amount of time and effort.

The Risk Of Binary Options

Binary Options trading has become popular over the last few years due to it’s simplicity compared to other types of investing.

I’m sure you’ve probably read or will read other people claim that they’ve become rich from it, when in reality it’s basically like gambling.

Basically you make a bet of let’s say $50 that a certain stock, in this case a cryptocurrency will rise or fall in a set amount of time (normally a couple minutes).

If you guess it correctly, you win probably around 60% to 80% of the money you bet, if you’re wrong you lose it all. There are several problems with this.

First off, there is simply no way to accurately determine whether a stock will rise or fall within such a small amount of time.

All you can do is guess, same goes for all of the “auto-traders” like Crypto Money Maker, Crypto Genius and Crypto Edge that claim they have an algorithm. All they can really do is guess.

Secondly, even if you win that guess 50% of the time, you’ll still lose money because you stand to make less than what you stand to lose.

Is Cryptologic Bot A Scam?

Cryptocurrencies are notorious for randomly dropping crazy amounts within a day, and there is simply no way to predict when that will happen.

No software is going to do that, and if it could it would be incredibly easy to become rich basically over night.

They are simply lying to your face in order to get you to give them your money. If you invest $250 into an account I suggest you try to withdraw it because you’ll lose it all if the software trades it.

A Much Less Risky Way To Make Money Online

If you are interested in making money online, and are willing to actually put in plenty of time and effort, then I have a suggestion.

My Top Ranked Program has helped me build up an income online that has allowed me to quit my job and work completely from home!

Like I said, it takes plenty of time and effort, but if you’re willing to work it is completely free to get started!

Is CryptoLogic Bot A Scam? What Do You Think? Let Me Know In The Comments Below!