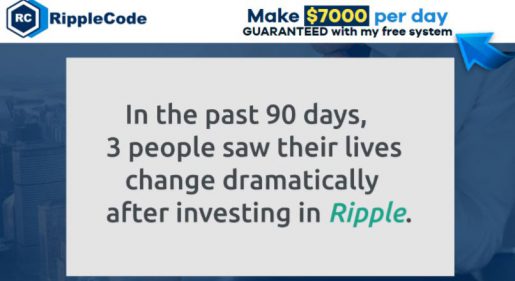 In this quick review of Ripple Code I’ll be giving you everything you need to know about it before giving them your money.

Will you actually me able to make $7000 per day, or are they just trying to get your money?

Is Ripple Code A Scam? YES!

Is Ripple Code Recommended? No!

What Is Ripple Code?

Ripple Code claims that it’s a completely free system that can make you a guaranteed $7,000 per day automatically.

Apparently a guy named James White will allow you to use his Cryptocurrency advertising placement flipping system completely free.

That sounds too good to be true doesn’t it? Well that’s because it is.

This entire system is a scam, and throughout the rest of the review I’ll be giving you several reasons why.

I always try my hardest to come up with at least one good thing to say about every program I review, however that doesn’t always work out!

Over the next few sections I’ll be going further in depth about the points I listed above.

When the photo of “James White” popped up I immediate knew that I had seen his face before.

I couldn’t quite put a finger on it, but after doing some research I found that he’s actually the same person from another scam called Bitcoin Code.

When I say “person” I mean they use completely different names, but they just happen to use the same stock photo of a random model. 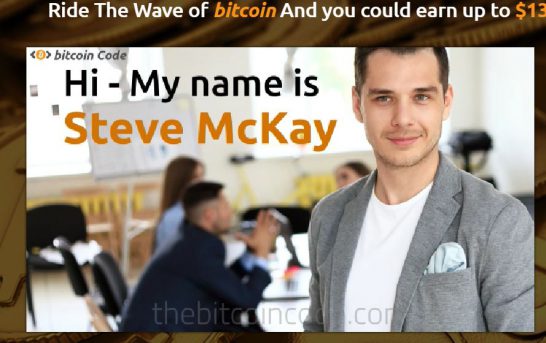 One thing I want to point out is that there are several scams that I’ve reviewed in the past that are incredibly similar to this one.

They look slightly different but they all make the same claims, and scam you the exact same way.

I already mentioned Bitcoin Code, but there are other ones like Free Ad Cash System, and Bitcoin Advertising System.

It Makes No Sense

Another thing I want to point out is the fact that advertising flipping isn’t even really a thing.

It’s just a completely made up thing that kind of sounds real to people who don’t know anything about how money is actually made online.

How It Really Works

Ripple Code isn’t actually a real system, it’s just a catchy name and sales video they use to get you to sign up for another program.

Honestly they could change out the program you’ll be signing up for at anytime, but as of right now it’s a program called BannerBit.

The main thing you need to know about that program is that they will keep making you spend more and more money, and you won’t get anything in return.

A quick Google search will show you everything else you’d want to know.

Is Ripple Code A Scam?

Hopefully I’ve given you enough proof within this review to convince you that it’s a scam.

You won’t make anywhere near the $7,000 per day they promise you, and you’ll be lucky if you get out without losing a ton of money.

If you’re interested in actually making money online, I suggest you check out My Top Ranked Program!

Since joining their program I have been able to build an online income that has allowed me to quit my job and work completely from home!

Is Ripple Code A Scam? Did You Lose Your Money? Let Me Know In The Comments Below!