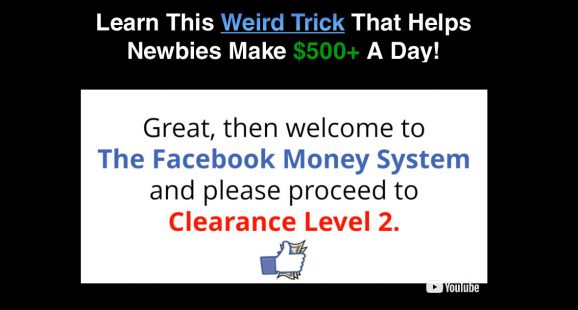 In this review of Facebook Money System I’ll be going over exactly what it is and telling you whether it is a scam or not.

The Facebook Money System claims to be a push button method that can easily make you thousands of dollars online.

They claim that you’ll be “Literally clicking one button and the rest is done for you!”

There are claims that it will start making you $500- $1,000 a day almost immediately, and it will make your rich over night.

All of these claims sound way to good to be true…

Well let’s dive in and go over what the system really is.

Right off the bat The Facebook Money System immediately reminded me of another similar program called FB Cash System.

They have similar names, and the sales videos are incredibly similar as well.

The videos both involve the creator supposedly being at a meeting with Bill Gates and Mark Zuckerburg, and learning of a loophole that can be exploited.

John Crisper turned out to be a total scammer who stole peoples money, and I’m willing to bet Angela is too.

There are multiple websites that promote this same system. So regardless of whether you are on thefbmoneysystem.com, instantincomeathome.com or some other website, if it says The Facebook Money System, this review applies to it.

Let’s go over several reasons why I think you should avoid this so called system.

Over the next several sections I’ll be going over exactly what I mean with these points.

One thing that scams will do is claim that you’ll be able to start making an insane amount of money incredibly fast.

This is a huge red flag, that at the very least is misleading and always a lie.

It is absolutely possible to make a lot of money online. I know many people who make $500 + a day online. I don’t make that much but I do make my living online.

With that being said, it took them and myself quite some time and effort to be able to reach the success we have.

There is simply no way to start making that kind of money online over night.

I’ve reviewed and tested hundreds of online money making programs, and not a single one has made me rich over night.

It is not impossible to make money online if you get access to the proper training, tools, and support.

However there is no such thing as a push button method.

No matter what the method is, you will always have to put in plenty of effort to make money online.

Scams like FB Money System like to claim that you’ll get rich by barely doing anything, and that’s simply not possible.

It is possible to make money with Facebook, but you have to build up a huge following, which take a ton of time, effort, and often times money.

In the first sales video they claim that when you move on the level 2, you’ll get $500 from them.

Then when you move to the next step, they simply don’t mention it again.

They do this so that you’ll keep moving forward through the process in hopes of hearing about it again.

I want to make it clear that I didn’t purchase this system, however I’ve purchased many other similar scams, and I have a good guess as to what will happen…

Scams like this one will offer you $500 to peak your interest, and then dangle it in front of you for a long time.

They will just keep saying, “you’ll get your $500 once you purchase these other expensive items.”

At the end of the day, one of two things will happen. 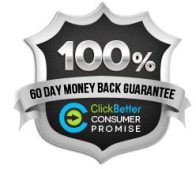 If you purchased this system before reading this review, here’s how to get a refund.

Lucky for you this website has been setup under another system known as ClickBetter, which guarantees a 60 day return policy.

Refunds are not always easy to get, but just keep trying until you get your money back.

Is FB Money System A Scam?

Like I said earlier, I didn’t try it; however, that is simply because there are too many red flags, and I’ve already lost money to many other similar scams.

With that being said, I’m certain it is a scam and I recommend that you

If you decide to purchase it or already have, please be sure to let me and everyone else know what happened in the comments below.

I mentioned earlier that it is absolutely possible to make money online, and I know that because I make my living online.

It takes time and consistent work, but it’s possible if you get access to the proper training, tools and support.

You can get started for free with all three of those things in the same place I get them.

Is FB Money System A Scam? What Do You Think? Let Me Know In The Comments Below!

2 thoughts on “Is Facebook Money System A Scam? [Must Read Review]”