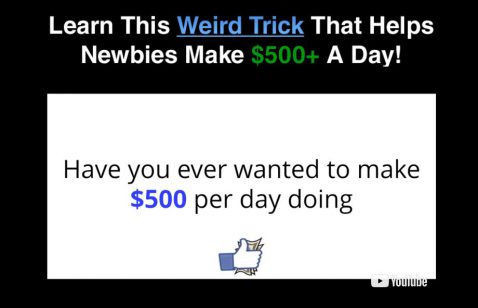 In this review of Instant Income At Home, I’ll be going over exactly what the system is, and telling you whether I think it’s a scam or not.

Is Instant Income At Home A Scam? YES!

What Is Instant Income At Home?

Instant Income At Home claims to be an automated system where you only have to click a button and earn $500 a day.

They claim that you’ll only be spending about an hour a week, posting on social media websites and checking stats.

Many of the claims they make seem like they are too good to be true, so let’s jump in and found out if they are.

What Is Instant Income At Home Really?

As you watch the sales video you will quickly realize that it’s a sales video for another program called Facebook Money System.

Which is basically just a rehashed version of another program called Facebook Cash System.

Instant Income At Home is just one of many websites that are set up to try and get you to sign up for another system.

Notice how the sales video never says the words, Instant Income At Home?

That’s so they can change out the sales video to any program they want to once everyone realizes Facebook Money System is a scam!

This is the part where I try to find some good and bad things about the program that I’m reviewing.

Over the next few sections I’ll be going over exactly what I mean with the points I listed above. 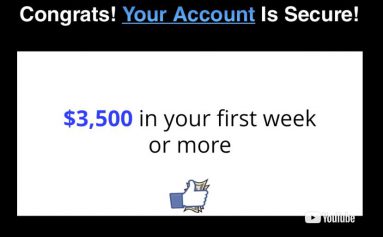 The simple truth is that you are not going to immediately start making $500 a day through this system or any other system.

In the sales video they try to make it seem like you’re just going to be pressing a few buttons, and instantly start making money.

Don’t get me wrong, it is possible to make that type of money online, however it’s not going to be anywhere near as quick and easy as they make it sound.

Quite honestly, I don’t even think they provide you with the proper tools, training, or even method to make that kind of money online.

I’ll get more into what will happen when you sign up a little bit later.

One thing I want to make sure you understand is the fact that you won’t get the $500 they promise you.

In the first sales video they claim that as long as you stick through the videos, you’ll get $500.

Most website out there that make this claim will simply “take” $500 off of your purchase.

However it appears that this system takes a different, more frustrating approach.

Let me explain in the next section.

Here’s what’s most-likely going to happen if you do decide to purchase into this system.

After you sign up for the program and pay the $37 they will keep giving you things that you need to buy.

Odds are that they will keep dangling the $500 in front of you, and claim that you’ll get it once you purchase these cheap items.

However even if you do purchase them, you won’t get the $500.

Just to be clear, I didn’t purchase this system simply because I’ve seen other “systems” that are incredibly similar.

However if you did purchase it, feel free to let me know exactly what happened in the comments below.

Is Instant Income At Home A Scam?

I mentioned it once but I’ll say it again, I didn’t purchase this system so I can’t without a doubt say it’s a scam.

With that being said, all of the red flags and lies lead me to believe without a reasonable doubt that it is a scam.

Either way it is a system that you should

I promise that it won’t be as easy as they claim, you won’t make as much as they claim, and you’ll be paying a lot more than the initial $37 to get everything they offer.

If you are interested in making money online, and are willing to put in some time and effort then I have a suggestion for you.

My Top Ranked Program has helped me and many others make a living online!

Push button methods simply don’t exist. You will have to put in a decent amount of consistent time and effort, but I promise you’ll get results if you do.

Is Instant Income At Home A Scam? What Do You Think? Let Me Know In The Comments Below!