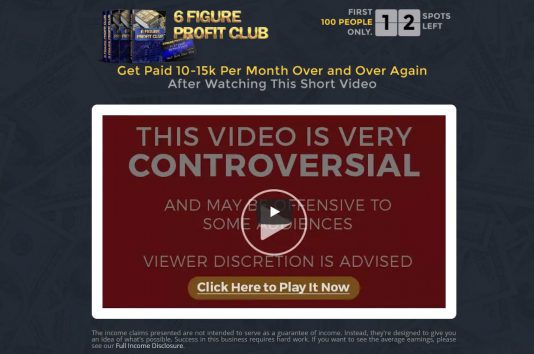 In this quick review I’ll be going over exactly what 6 Figure Profit Club is and telling you whether I think it’s a scam or not.

Will you actually be able to make 10-15k per month, or are they just telling you that to get your money?

Is 6 Figure Profit Club Recommended? NO!

What Is 6 Figure Profit Club?

6 Figure Profit Club claims to be an online money making opportunity that’s being brought to you by someone name Sean.

They even go as far as claiming that you’ll be able to make $500 if you simply watch through the entire video.

Unfortunately they don’t give you much more information than that, so I had to do a bit of digging to find out what it actually is.

I’ll go over that here shortly.

Let’s go over some of the good and bad about this program.

Over the next few sections I’ll be going a bit more into detail about what exactly I mean with the points I listed above.

One red flag that I see right off the bat is all of the crazy income claims they make all over the place.

Right at the top they claim that you’ll get paid 10-15k per month after watching the “short” sales video.

The income claims themselves aren’t that unrealistic, seeing as I know many people who make those amounts of money online.

The unrealistic part is the fact that they make it seem like you’ll be able to copy a few things in your free time, and you’ll start making that much money super quickly.

When in reality if you want the chance to make that much money online you’re going to have to put in a lot of time and effort!

Another thing I see in a lot of scams is the fact that they claim that there are only a couple spots left.

Some legitimate programs like Elite Blog Academy actually do have a limited number of positions, however they aren’t lying about it!

With 6 Figure Profit Club they are just claiming that in hopes that you’ll purchase it before thinking about it because you’ll be worried about missing out.

The truth is that no matter how long you wait, or how many people sign up before you, they will always take your money.

There are a lot of scams out there that claim that you’ll get $500 if you watch through their entire sales video.

One good thing I can give to 6 Figure Profit Club is the fact that they actually tell you it’s just going to be a discount.

However I have to immediately take away the props I have them because you’ll get the “discount” no matter what.

Whether you watch the video or not, you’ll always end up paying the same amount.

So basically here is what the entire purpose of 6 Figure Profit Club is:

It is a sales funnel created specifically to get you to buy into a completely different program called MOBE (My Online Business Education).

The person who created the website is a MOBE member who will make a large percentage of the money you pay to join.

In short, it’s is an online money making training program that basically teaches you how to get other people to join the same program you just joined.

So you’ll basically be doing something similar to what the person who created 6 Figure Profit Club is doing.

There are a lot of different websites similar to this one that purposely try to mislead you into joining MOBE or other programs like it.

Here are a few that I’ve recently reviewed: Seven Figure Profit Code, Cash In On That Passion, and Secret Millionaire Training.

I don’t personally consider MOBE itself to be a scam, however there are many people out there who do for one main reason.

Regardless of whether or not you think the $99 price tag is expensive, it is nothing compared to the overall cost of the program.

Like I said, you’ll be making money by getting other people to sign up and pay for expensive MOBE membership levels.

Well the main catch is that you have to purchase into their levels in order to make money from getting people to pay for them.

Here are the prices you’ll be paying:

Those are the prices that you’ll have to pay if you want to be able to unlock the full potential of the program, and have a chance at making the type of money they claim.

Is 6 Figure Profit Club A Scam?

It’s honestly debatable whether or not 6 Figure Profit Club is a scam. They mislead you into joining by hiding what the real program is, lying about limited positions, and exaggerating expectations you should have.

It’s up to you to decide whether or not you want to call it a scam; however, I still do not recommend that you join this program simply due to the crazy prices!

If you’re interested in making money online WITHOUT spending a ton of money, then I have a suggestion for you.

My Top Ranked Program has helped me build an online income that has allowed me to quit my job and work completely from home.

It takes plenty of time and effort, but if you’re willing to work it’s completely free to get started.

If you are interested in learning more, then you can…

Is 6 Figure Profit Club A Scam? What Do You Think? Let Me Know In The Comments Below!