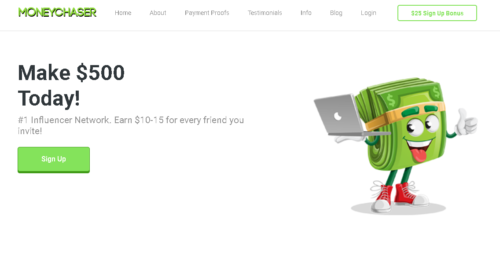 In this quick review of Money Chaser/ Moneychaser.co I’ll be going over everything you need to know about it.

Will you actually be able to make $500 today, or are they just trying to scam you?

Well unfortunately it’s looking like they are just trying to pull one over on you.

Before I get into the reasons why they shouldn’t be trusted I want to let you know you can Click Here to learn how to really make money online!

Is Money Chaser A Scam? Basically

Is Money Chaser Recommended? No!

What Is Money Chaser?

Moneychaser.co claims to be an incredible website that will pay you a bunch of money to sign up, and to get other people to sign up.

While it might seem like an incredible way to make a ton of money online, it’s not what it claims.

What Money Chase claims to be and what it actually is are two completely different things.

In reality, Moneychaser.co is a website whose main goal is to get as much of your information as possible, without giving you any money.

Basically the website is an information “farm” of sorts, that wants to get the email addresses, passwords, phone numbers and whatever other information they can from as many people as possible.

They use a bunch of shady tactics, and straight up lies to make it seem more legit.

I’ll be getting more in depth about all of those things shortly.

This is normally where I write both good and bad things about a program, but there’s only bad things for this one.

Throughout the next several sections I’ll be breaking down all of the points that I just listed out above.

The hard to swallow truth is that you will never actually get the money that you’ve earned on the website.

You build up a bunch of money in their fake account, then when it comes time to cash out, they won’t pay.

Here’s what will most-likely happen.

When you try to get your money, you’ll get a message saying that you committed fraud.

They’ll say that you got fake clicks, or fake referrals and use that as an excuse to ban you, or just to not pay you.

“if our team finds any fake referrals/clicks, your account will be banned and your payment will not be approved.”

This gives them an excuse to not pay a single person the money they earn.

Like I said earlier, it’s an information “farm” whose sole purpose is to get your information, and most-likely sell it.

What information did you give them?

Did you use an email address and password combination that you use for other accounts.

Paypal Accounts or bank accounts even?

If so, you should go and change your passwords immediately, and look over your accounts.

Another shady thing is their task wall:

All of the tasks (that you won’t actually get paid for) require your email, phone number, and other “valid details.”

Many of them require you to enter banking information to sign up for free trials.

If not cancelled in time you will be charged the full price.

Also, who’s to say they are all legitimate free trials?

Some could be fake ones that just want you banking information.

Be careful, change your passwords, cancel the trials, and keep an eye on your money.

#3: Similar To Other Scams!

The unfortunate truth is that websites almost exactly like Money Chaser are all over the internet.

Just in the past few weeks I’ve stumbled across Kids Earn Money, Clout Bucks, and CashOg.

All of which are basically the same website that’s been renamed , probably by the same group of people.

Within moneychaser.co you will find both fake testimonials as well as fake reviews.

If you scroll down to the bottom of their home page you’ll see “happy member” testimonials from people claiming to have made thousands.

Well the truth is that these testimonials are completely fabricated, and they just use stock photos as images of the members.

Also, if you click on the “video testimonials” page, you’ll come across several fake reviews.

These videos are short video bought off of a website called Fiverr.

The above image is a screenshot of a Money Chaser review, while the image below is from Fiverr.

The creator of this website paid 5 bucks to have an actress make a short review.

Moneychaser.co is full lies, misleading information, and even fake testimonials.

Not to mention, at the end of the day you will never be paid the money that you earn.

Wouldn’t you call that a scam?

I strongly suggest that you stay away from Money Chaser, but if you do decide to give it a try, use fake information.

Just keep in mind that by sharing it with friends and family, you will be opening them up to being scammed.

Believe it or not, there are actually websites and companies out there who will pay you for getting people to sign up for their services and buy their products.

Did you know you know even big brands like Walmart, and Amazon will pay you to get people to buy stuff from their websites?

They have programs called affiliate programs that allow you to earn money.

The method for making money online this way is called affiliate marketing, and it’s How I Make My Living Online!

It sounds simple, but there is a whole lot that goes into it, which is why I suggest you check out My Top Ranked Training Program!

They give you access to all of the training, tools, and support you need to make money online!

Is Money Chaser A Scam? What Do You Think? Let Me Know In The Comments Below!