What Is Entrepreneur Jobs Club?

Depending on which sales page you ended up on for Entrepreneur Jobs Club, you’ve probably heard different things about it.

There are several pages and websites out there promoting this scam, and they all make different claims.

Most of them make claims like you’ll make money in five minutes, or you’ll make $7,487/Month.

I just want to start off this review by telling you that none of those claims are true!

CLICK HERE TO LEARN WHERE TO MAKE REAL MONEY ONLINE!

I always try to be as fair as I can to each program I review and list out both good and bad things about it!

Over the next several sections I’ll go over exactly what I mean with each of these points.

They’ll even have entire fake articles, and news stories to go with their pages.

I promise you that all of these claims are lies, and the news articles are absolutely fake.

The TV news story is technically real, however it isn’t about Entrepreneurs Jobs Club, notice how they never say it’s name?

This is a common tactic that scams will use to try to get you to sign up and pay without thinking about it.

They claim that there are only “9” positions left and you’ll miss out if you don’t hurry.

I promise that no matter how long you wait, or how many people sign up before you, they will always take your money.

Depending on which website or sales page you ended up on their will be different testimonials.

I’ve seen some that are video testimonials, and others are just written ones.

The written ones just use stock photo images, and the creators write some generic testimonial that is completely a lie.

They always claim that they’ve made a ton of money, and it’s super easy.

Video testimonials can often be the most convincing because it’s hard to believe that they would hire actors.

Well they do hire actors, and it’s not as hard as you would think.

Websites like Fiverr have people offering to make fake testimonials for as cheap as five bucks.

This is something that you almost always see scams do. That make claims like you’ll make $379/day, with little to no work!

Or that you’ll make $500 within the first 72 hours or something.

The truth is that’s just simply not going to happen online.

To be clear, it is possible to make a lot of money online, in fact I make my entire living from the internet.

With that being said, it’s not going to be super fast, it’s going to take real work, and you can’t expect to make $379/day without putting in a ton of time.

The simple fact of the matter is that this is what’s known in the online money making community as a link posting scam.

Yes, companies will pay you to get people to go to their websites and make purchases. That’s how I make my money online.

With that being said, link posting isn’t going to work.

They’ll teach you how to spam links, in places that will simply automatically delete them.

In the past this would work, buy now-a-days websites simply detect the spam and delete it.

Even if it doesn’t get deleted, people have learned not to click on spam links.

If you’ve made it this far in the review and still aren’t convinced that this is a scam, you should be convinced with this.

Entrepreneur Jobs Club is exactly like dozens of other scams that I’ve already reviewed in the past.

When I say exactly I mean exactly. 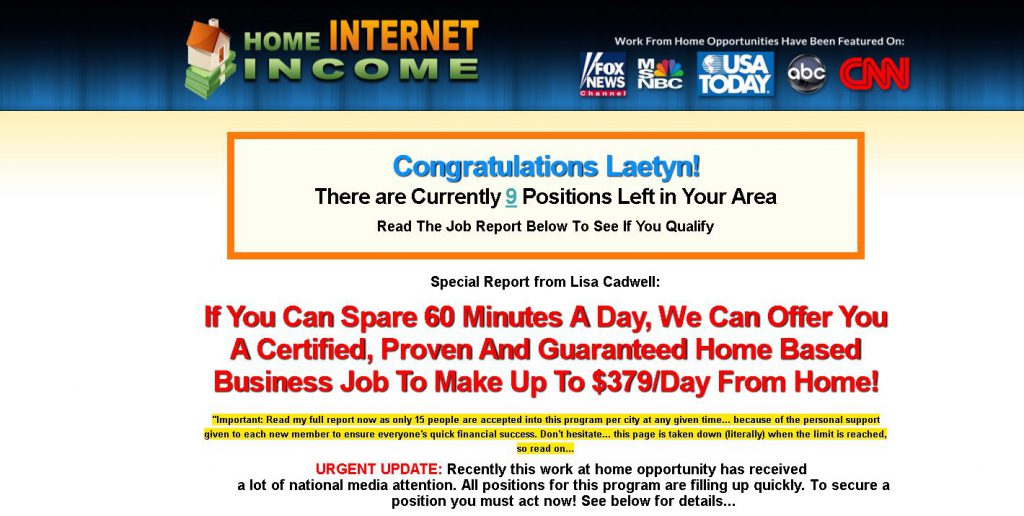 If that sales page looks familiar to you it’s because it’s been used dozens if not hundreds of time before.

That’s just one of them, you can check out Secure Job Position, Accelerated Income, Home Jobs Today, and Online Jobs Now, just to name a few!

What Is Entrepreneur Jobs Club? A Scam!

Hopefully by the time you’ve made it to this point you’ve been convinced that it is a scam.

If none of the screenshots I showed looked like the page you’re on, it’s simply because it’s a sales page I didn’t find!

Like I said before, it is absolutely possible to make money online! I know that for a fact because I make my entire living online!

Anyone can do it as long as they get access to the proper training, tools, and support!

You can get started with all three of those things for free in the same place I get them!

If you are interested in learning more you can

What Is Entrepreneur Jobs Club? Do You Think It’s A Scam? Let Me Know In The Comments Below!